11 Gorgeous (And Challenging) Forest Half Marathons 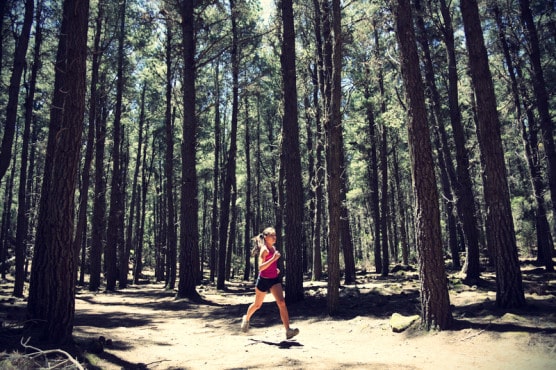 “Among the scenes which are deeply impressed on my mind, none exceed in sublimity the primeval forests … No one can stand in these solitudes unmoved, and not feel that there is more in man than the mere breath of his body. ” — Charles Darwin

Running through the woods is the kind of experience that differs from an ordinary run around your neighborhood or out on the roads. It’s almost like a story unfolds when you tromp along wooded trails, as there’s always at least a little bit of mystery out there.

I think that’s what draws those of us who run trail races to them, and it’s easy to see why when you try out a trail race for yourself. We’ve put together a list of 11 of the nation’s best races like these, and we’d love to know what you thought if you’ve run any of them:

The deep woods trails alongside the cool, green Clarion River in northwestern Pennsylvania are the setting for this race, which takes place every spring in this 6,668-acre state park, often called the “Black Forest” and located just over 30 miles north of the town of Punxsutawney, of “Groundhog Day” fame.

Mountains, beaches and a challenging hilly trail run through a vast, unspoiled wilderness that sits right across the bay from San Francisco await at this race, an out-and-back loop that starts at Rodeo Beach in the Marin Headlands of the Golden Gate National Recreation Area.

Dramatic scenery and the chance to run through the hills and rain forests above the town of Volcano here on the big island of Hawaii are the draw at this race, which follows trails near the entrance to Hawaii Volcanoes National Park.

Named one of America’s most scenic trail races by Trail Runner magazine, the course takes runners along what is known as the Ice Age Trail in Wisconsin’s Kettle Moraine State Forest, whose topography was formed by the receding of the Wisconsin glacier some 13,000 years ago.

A few hundred runners cross the finish line here each year, at a race which takes runners on a mix of roads and trails through redwood forests, with fog from the nearby Pacific Ocean helping keep conditions cool along the course.

The name of this race captures perfectly the scenery runners can expect to encounter here in eastern Idaho, where the mountains on either side of the Montana-Idaho border meet among the trees of the Lolo and Clearwater National Forests.

Just off the coast of this small city on Lake Superior along Michigan’s Upper Peninsula, runners get a chance to run the trails, hills, beaches and forests of the 13,500-acre Grand Island National Recreation Area, which is accessible only by ferry boat.

You’ll need to be ready for high mountain running at this race, which unfolds above 9,000 feet above sea level and features some of the most spectacular natural beauty in the western U.S., through the Beaverhead Deerlodge National Forest in Montana’s southwestern corner.

You’re going to be very sore the day after you finish this race between Jonas Ridge and Mortimer, N.C., as the elevation drops more than 2,000 feet from the start to the finish in the Pisgah National Forest, near the southern end of the Appalachian Mountains.

Colorado’s Cache la Poudre River and the Poudre River Canyon serve as the setting for this race, which takes place at the time of the autumnal equinox. Starting at 5,900 feet above sea level, it’s all downhill from there as runners make their way through the Roosevelt National Forest.

You’ll run in the shadow of coast redwood and Giant Sequoia trees that line the Avenue of the Giants highway at this fall race through Northern California’s Humboldt Redwoods State Park, many of which reach more than 200 feet in the air and are more than a thousand years old.

Previous post: 5 Popular Running Apps: How They Stack Up