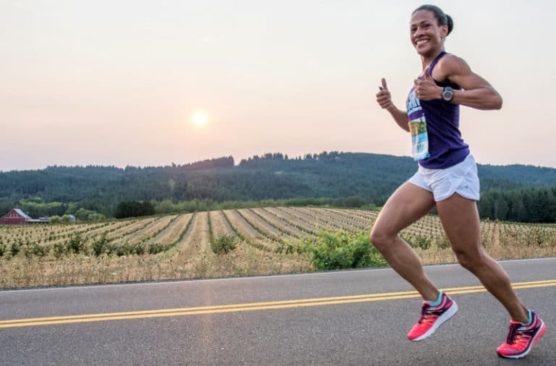 “Most running, even as practiced by Olympic champions, is not hard, fast, exhaustive running. Slow down, enjoy the scenery, and ask your running buddies how they’re doing. An easy training run provides the perfect opportunity for this… Our busy days often don’t provide enough chances for catching up on things. A run does.”

Set in the sands of Nevada’s Mojave Desert and surrounded by mountains, the course for this race unfolds through the 179,000-acre Red Rock Canyon National Conservation Area, where you’ll take in just about every hue of red, orange and burnt earth colors surround you as you run along the Scenic Canyon Road. The park, which is home to majestic red sandstone formations, sheer 1,800-ft. cliffs and several mountains, features a paved route for the entire race — it starts at 3,880 feet above sea level and reaches a peak of 4,771 feet around the half-way point, before descending again in the second half.

2) The Border to Badlands Ultra

The second in a series of eight running events throughout the year known as the Texas Trail Running Eco Series — which take runners to far-flung places around the state like the hills of Palo Pinto Mountains State Park and the beaches of Mustang Island — this race unfolds along a combination of single-track trails and backcountry jeep roads deep in the Chihuahuan Desert. You’ll run just a few miles from the U.S. border with Mexico and get to take in some truly spectacular views of Seminole Canyon and the waters of the Rio Grande during the race — and if you’re up for it, the race also hosts a full marathon and even a 50-miler.

A stunningly beautiful run through the high desert country of western Colorado, along parts of the 142-mile-long Kokopelli Trail, a mecca for backpackers and mountain bikers that stretches between Fruita and Moab, Utah. You’ll run at elevations between about 4,000 and 5,400 feet above sea level during the half marathon, which starts near the northern edge of the McInnis Canyons National Conservation Area, and from there heads up onto the Kokopelli, offering up panoramic views of canyons and mesas as well as the winding Colorado River below.

A gorgeous run through the lush wildflower fields of Washington’s Methow Valley, which runs along “well marked deer trails, single track trails, and gravel roads” starting from the tiny community of Mazama, Wash., and running to the nearby town of Twisp. In between the start and the finish, the half marathon — which actually is a little longer than the standard 13.1 miles, as is the full marathon (at 26.8 miles) — features some big climbs and descents, organizers say, but the sight of “carpeted meadows of sunflowers” will take your mind off all of that.

A land filled with forests, rail trails, lakeside stretches and plentiful waterfalls — that’s what awaits runners here in Upstate New York at the Gorges Ithaca Half Marathon, which makes its 4th annual running this summer on a course organizers describe as “one of the fastest and most scenic half marathons you’ll ever run. Period.” The point-to-point route for the race begins along Dubois Road in the nearby town of Ulysses, which if you’ve read your Homer you will recognize as the Latin name for Odysseus — the hero of the epic poem The Odyssey — who hails from the Greek island of Ithaca and it’s there he spent the entire story trying to get back. 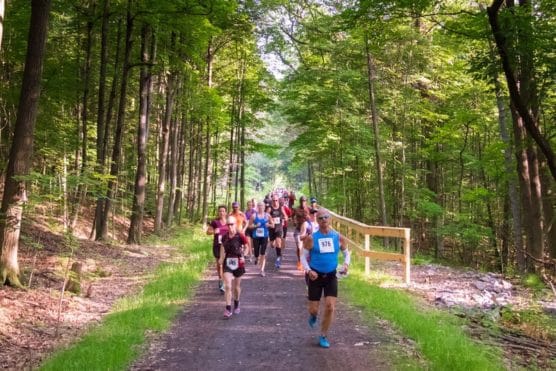 If there ever were a bucket list race, this jaw-droppingly beautiful yet treacherously grueling race through the forests of Mt. Tamalpais State Park just across the Golden Gate Bridge from San Francisco — which the New York Times called a “topographically schizophrenic romp” — is it. At just 7.4 miles, the distance is misleading; from the starting line in Mill Valley, you’ll climb dizzyingly steep trails through the woods, only to make a dramatic plunge toward the Pacific later in the race. Its past winners, too, are something of a head-scratcher — everyone from an 8-year-old girl to a 72-year-old man have been crowned its champion over the years.

Some of the most beautiful, awe-inspiring and jaw-dropping scenery you can imagine is on display at this mid-summer race, which runs through the Beaverhead Deerlodge National Forest in Montana’s southwestern corner. The Big Sky race is the second of a two-day event, and organizers say it’s the second-longest downhill marathon in the world. Both the 13.1- and the 26.2-milers at Sunday’s Big Sky race start above 9,000 feet above sea level, and the half marathon drops by about 3,400 feet by the time you reach the finish line, at the half-way point of the full marathon. When you’re out on the course, be sure to watch out for sheep-herding Great Pyrenees guard dogs — which aren’t pets, organizers emphasize, and will chase you if you run.

If you’re a wine enthusiast and you enjoy the Pinot noirs that come from the Willamette Valley, you’ll love running this race, which unfolds in the misty, cool climate this region in northwest Oregon is known for. Runners start on the grounds of the Stoller Family Estate wineries and then follow a winding route among the vineyards in the countryside just outside of Carlton — encountering a few hills, particularly in the middle miles of the race, but nothing too challenging — all the way to the finish line in downtown Carlton, where you’ll be able to taste vintages from more than 20 local wineries at the post-race festival.

Billed by its race organizers as “the most beautiful marathon in the world,” this race takes runners on a jaw-dropping, awe-inspiring tour of the mountains that lead up to one of the most stunning peaks in the Swiss Alps. From the starting line in Interlaken, a resort town that lies on a stretch of land between a pair of lakes, the route climbs nearly 5,000 feet by the time you reach the finish line, at the Kleine Scheidegg railway station — where you’ll catch the train back down to Interaken.

A stunning run through Maine’s Acadia National Park, the only race of its kind that actually runs through the grounds of a U.S. national park, and takes place at a time when the autumn leaves are turning brilliant shades of orange, red and gold. Most of the race unfolds along the 47,000-acre park’s carriage roads, built by the philanthropist John D. Rockefeller between 1913 and 1940 to offer a way for “city-folk” to escape the urban jungle to get away to the park’s seashores, forests and lakes. Today they’re filled year-round with walkers, hikers, bicycles and horse-drawn carriages — but no cars.

See mountains, rivers, lakes and glaciers as you run the hills and trails of Chile’s Torres del Plaine National Park at this stunningly gorgeous and challenging race that runs in the early spring — which begins in September in the Southern Hemisphere. You’ll run near the southern tip of South America, more than 150 miles from the nearest city, among one of the planet’s most pristine environments. As the organizers say, you’ll get to experience “the magic of running in Patagonia, together with runners from around the world and the adventure of confronting a restless, and sometimes even hostile, climate.”

Nestled along the southern end of the French island of Corsica, this port city looks out onto a beautiful Mediterranean harbor, where yachts come and go under the watch of 16th-century Genoese fortifications and watchtowers that still stand today. The point-to-point course for the half marathon, which starts near the port, is flat for the first couple of miles and then features a steep ascent followed by rolling hills throughout the remainder of the race. Some stretches of the race take you past the beaches of Palombaggia, while others unfold right alongside the Mediterranean Sea, before heading toward the marina near Santa Giulia, where you can take a dive in the sea after you cross the finish line.

A run among the paved roads and trails that wind through Chickamauga & Chattanooga National Military Park, where the bloodiest two-day battle of the Civil War claimed the lives of 4,000 Union and Confederate soldiers in September 1863. Along with those running the full marathon and the 10K, you’ll start from the 6th Cavalry Museum at the northern end of the park, and from there follow a loop route that will take you past many of the memorials, cannons and monuments found throughout the park, all of which tell the story of the battle that spelled “the death knell of the Confederacy.” (Perhaps it’s needless to say, but the park today is a much more peaceful place, with 5,500 acres are filled with forests, streams, wide-open grassy meadows, and horse and hiking trails.)