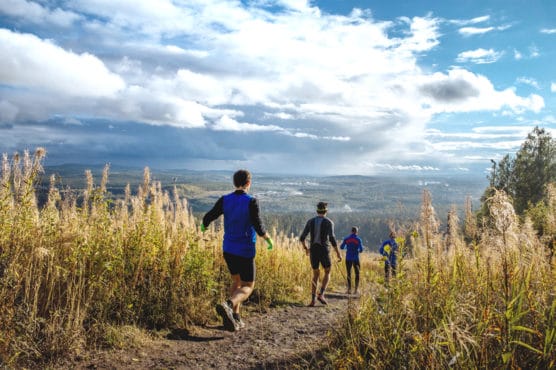 Named one of America’s most scenic trail races by Trail Runner magazine, this race features a diverse natural landscape of ponds and marshes as well as wide-open prairies and forest lands, through which runners will make their way along a series of both single- and double-track trails.

One of the more challenging trail races in any state, this event — described as “not your typical race” — unfolds through water and across trails that are sometimes wet and muddy, and over rocks, hills, downed trees and seven miles of the area known as the horseshoe trail.

Runners get the chance to trek thorugh one of the “seven hidden wonders” of the west at this race, whose course unfolds within sight of several of Northern California’s best-loved sights like Napa Valley, the San Francisco Bay, Mount Diablo and Mount Tamalpais.

Slightly longer than most other half marathon races — with 13.2 miles of up-and-downhill trail running through the deep hardwood forests of West Virginia’s New River Gorge National River area — this race runs along a natural trail of both loose and packed dirt, tree roots, rocks and streams.

Standing at 3,849 feet above sea level, Mount Diablo offers one of the toughest challenges in the San Francisco Bay Area, a steep and relentless uphill run from the start to the peak of the mountain that also offers spectacular views of Northern California’s Central Valley.

“Prepare to leave dirty.” That’s the advice that the organizers have for the runners who’ll head into the winding single-track trails of northeastern Ohio’s Cuyahoga Valley National Park at this race, which features plenty of uphill climbs and downhill descents.

Lush, beautiful greenery and expansive natural lakes mark the scenery at this race, nestled midway between San Francisco and Sacramento with beautiful rolling hillsides and numerous fruit orchards and farms, with a trail route that offers gorgeous scenery and rugged terrain.

Run along glacier-carved terrain that’s more than 10,000 years old in the Lapham Peak unit of the Kettle Moraine State Forest, along an out-and-back loop route along the park’s Moraine Ridge trail, which spans some 30,000 acres in western Wisconsin.

Set among the winding trails of Colorado’s Bear Creek Lake Park, a short drive southwest of downtown Denver, this race offers a combination of challenging trail runs through the 2,600-acre park as well as gorgeously scenic views of the Rocky Mountains off in the distance.

With 13.1-milers set for both Saturday and Sunday of the race weekend, this event features one of those rare treats — a course that’s nearly all downhill, which has helped it become known as the “fastest marathon in the West,” according to race organizers.

Run the challenging hills and trails of a piece of Hollywood history at this race, which follows an out-and-back course through a park that’s played a role in countless movies and television shows, like the 1955 James Dean classic “Rebel Without a Cause.”

Featuring a point-to-point run along the hilly single-track trails of Thousand Hills State Park, this event runs through a part of northern Missouri filled with gently rolling hills as well as steep, rugged downhills and uphills carved by glaciers, rivers and streams over thousands of years.

This out-and-back trail run takes runners around nearly the entire four square miles of 1,800-acre Mackinac Island, which was officially designated as a national park in 1875 — just the country’s second national park ever, after Yellowstone.

Run around a trio of lakes that lie just a short drive north of downtown Greensboro, this race unfolds along the linear nature trails known as the Watershed Trail System that wind their way along the shorelines of Lake Brandt, Lake Higgins and Lake Townsend.

The Hawaiian island of Oahu hosts this spectacular race through Kualoa Ranch, a 4,000-acre working cattle ranch that reaches from steep mountain cliffs to the sparkling Pacific Ocean, from its dense rainforest to broad open valleys, and from beautiful white sand beaches to verdant cliff faces.

Previous post: How to Pick the Right Half Marathon Training Plan For You