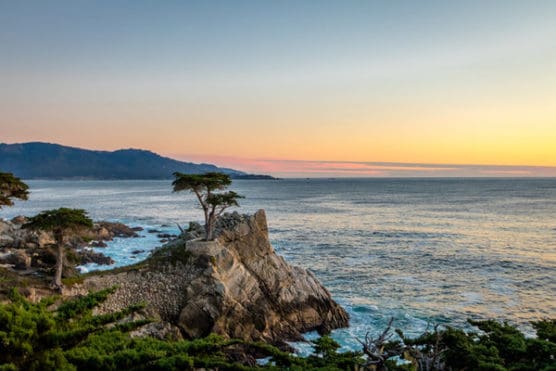 The famed Lone Cypress along 17-Mile Drive in Pebble Beach, Calif., one of the sights you’ll see along the route at the Half Marathon at Pebble Beach. (© Diego Grandi | Dreamstime)

“Each person deserves a day away in which no problems are confronted, no solutions searched for. Each of us needs to withdraw from the cares which will not withdraw from us.” — Maya Angelou

You’ll get your chance to run through one of the East Coast’s most exclusive (and gorgeously scenic) resorts when you run this race, which unfolds along the famed Sea Island Drive, where live oaks hang over the roads and perfectly manicured lawns lead up to some of the most luxurious beachfront homes anywhere.

Fast and nearly all-flat paved roads along tree-lined roads that wind through golf course communities and along the beaches of this resort island on the coast of South Carolina await runners at this race, which makes its 40th annual running this December.

3) The Half Marathon at Pebble Beach

Cypress trees, ocean breezes and the kelp beds swaying with the waves atop the blue waters of the Pacific Ocean — all that awaits and more at this all-new race for 2018, which promises a route that will be run entirely within the world-famous resort, along its legendary 17-Mile Drive.

Known especially for its golf courses, award-winning gardens and Cecil B. Day butterfly center, and seasonal holiday displays like its Christmas-time Festival of Lights, the Callaway Gardens resort in Pine Mountain, Ga., stages this smaller race event each January as part of its annual fitness event series, which also includes a duathlon and a triathlon later in the year.

Here’s a race that leaves you plenty of time after to explore Hilton Head’s plentiful beaches or just relax with a book on the sand, and a cocktail at the end of the day to watch the sunset as the palm trees sway in the wind.

When you run the long, gradual uphill climb that serves as the half marathon route here, you’ll see why so many skiing and snowboarding enthusiasts make the trip every winter and hikers, mountain bikers, golfers and fishermen in the summer — it’s one of the most scenic mountain resort towns anywhere in the southwest, at more than 8,700 feet above sea level.

You’ll start this stunningly picturesque race through Northern California’s High Sierras at roughly 9,000 feet above sea level, and follow a route that runs along a combination of trails and mountain roads — including stretches around lakes and across a bridge — next to the Sierra Nevada Resort and Spa.

As many as 1,500 runners makes their way from all corners of the globe every summer for this race, which features a point-to-point course that starts at the Waikoloa Beach Resort and unfolds past its golf course, hotels and homes, nestled here along Hawaii’s Kohala Coast.

Part of a weekend-long sports festival that takes place at the start of summer every year in the Sunriver Resort area, just east of Oregon’s Cascade Mountains, this race unfolds along scenic, wide paved bicycle paths, treating runners to views of the nearby Oregon forests, rivers and beautifully landscaped golf courses and vacation homes.

Open year-round for snow skiing, golf, dog sledding, snow shoeing, ice skating, fishing, horseback riding and for its spa, Michigan’s Crystal Mountain plays host on Memorial Day weekend to the North Mitten 13.1 and 10K race, both of which will follow out-and-back courses that start near the resort’s ski runs.

Filled with awe-inspiring scenery in all directions thanks to the Rocky Mountain peaks that spread far and wide, this race runs along the Sun Valley & Wood River trail system, a paved bicycle, walking and running trail that winds along the roads, streams and rivers throughout this ski resort town in central southern Idaho.

The rolling rural countryside of central New York state’s Mohawk Valley serves as the setting for this race, which runs along an out-and-back course that starts and finishes on the grounds of the Turning Stone Resort & Casino and runs out into the Mohawk Valley countryside.

This race along the shoreline of Lake George in the southern Adirondack Mountains unfolds runs through one of New York’s historic summer resort communities, framed by the famous homes that make up “Millionaire’s Row” on the western side of the lake as well as the camps and resorts all along the shoreline.

Timed to start runners off just as fall is arriving on the leaves, trees and slopes of this Rocky Mountain ski resort town, this event takes runners on a point-to-point course that starts in Snowmass Village and finishes in Aspen, for a race that has been lauded by the likes of Colorado Runner and Trail Runner magazines as one of the country’s most scenic trail races.

Set for an end-of-summer run among the stunningly gorgeous canyon country of southern Utah, within a few hours’ drive of the Grand Canyon and the Hoover Dam, this race starts in Sand Hollow Resort and follows an out-and-back course that circles the nearby reservoir in Sand Hollow State Park.

16) Sunriver Marathon For a Cause

Runners get the chance to trek through this 3,300-acre private resort community along the Deschutes River, near the base of the nearby Cascade Mountains at this race, which features a 5K family fun run & walk on Saturday and the full marathon and a half marathon on Sunday.

With its combination of road stretches through Colorado’s Breckenridge Village and much longer stretches along the wooded, mountainous trails just outside the town center, this race takes runners along trails that wind through the ski slopes that draw thousands upon thousands of ski enthusiasts every winter.

18) Under the Oaks Half Marathon

You’ll take an out-and-back tour of one of Georgia’s most beautiful “Golden Isles” at this race, where moss-draped oak trees tower over grassy lawns and 65 percent of the island is kept in its natural, undeveloped state.