21 Stunning National Park Half Marathons Across the U.S. 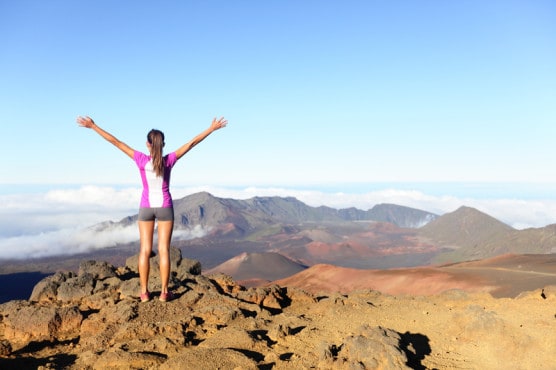 The United States has a plethora of unique natural treasures some of which, have been turned into National Parks. National Parks are areas set aside by the government to protect the integrity of the lands. If you’re not a camper, running is the next best way to experience the richness of these parks. Here’s a short list of the national park half marathons in the United States.

“Prepare to leave dirty.” That’s the advice organizers have for the runners at this race among the winding single-track trails of northeastern Ohio’s Cuyahoga Valley National Park, which draws a few hundred runners each year.

A gorgeous, scenic run through the Blue Ridge Mountains that straddle the Tennessee-North Carolina border await runners at this race, which takes runners on a gradual climb near the entrance to the national park just outside Knoxville.

Rising red canyons and stunning rock formations provide the backdrop for this race, which starts just outside of Moab at the historic Dewey Bridge. The spectacular scenery along the course may look familiar to fans of “Mission Impossible” and “Austin Powers,” parts of which were filmed here.

Named for the Native American word for “crooked river,” the 33,000-acre Cuyahoga Valley National Park just outside nearby Cleveland and Akron is the setting for this race, which runs along a paved and crushed limestone trail once known as the Ohio Canal Corridor.

Runners who love desert and lake views that go on for miles will love this race, which starts at John C. Page Park and heads into the southern end of the Grand Staircase-Escalante National Monument, which spans nearly 1.9 million acres of cliffs, terraces and river canyons along the Utah-Arizona border.

Get ready for a stunning – and all-downhill – race at this event inside Colorado National Monument, whose stunning multi-colored rock formations and canyon walls span more than 20,000 acres near the Colorado-Utah border.

You’ll run nearly all the way to the top of West Mountain at this race inside Arkansas’ Hot Springs National Park, the oldest unit the National Park System (it predates the dedication of Yellowstone National Park by about 40 years).

Set to run inside the boundaries of Florida’s stunning Everglades, this race unfolds along the Shark Valley Tram Road inside the park, where you’ll get to take in beautifully scenic views of its rivers of grass.

Held deep within California’s Death Valley National Park and limited to just 250 entrants, this race runs in a season when runners can expect both gorgeous views and temperatures comfortable enough for running.

Seemingly every hue of red, orange and burnt earth colors surround you as you run along the Scenic Canyon Road for this race, which takes place in the national conservation area by the same name about a half-hour’s drive from Las Vegas

Run entirely along a 6.55-mile stretch of Highway 190 through the flat, desolate desert terrain of California’s Death Valley National Park, this out-and-back race features panoramic views of nearby mountain ranges and is perhaps most famous for its elevation below sea level.

Run in the shadow of the majestic red rock formations of Utah’s Arches National Park at this race, whose USATF-certified course offers a challenging mix of rolling hills and fast descents at roughly 4,000 feet above sea level.

Run on (or around) St. Patrick’s Day, this race combines a desert-like environment, the crystal-blue waters of Nevada’s Lake Mead nearby and the majestic Hoover Dam in the distance, along a mountainous trail road through the hills of Lake Mead National Recreational Area.

Run along the trails and forest roads near the South Rim of Arizona’s jaw-dropping Grand Canyon, just a few miles south of the park entrance, this high-elevation race never drops below about 6,450 feet above sea level.

Run just south of Yosemite National Park in the woods of the Sierra National Forest, this race features a newly revamped course for its 2017 running which, organizers say, is “prettier, adds variety, and is easier on the knees.”

This race takes runners on a high-elevation, point-to-point climb through Wyoming’s Jackson Hole area, where they’ll cross the Snake River twice and finish within sight of the majestic Teton Mountain range, just south of the national park for which they’re named.

Spread across more than 3,400 square miles, Yellowstone is a park filled with geysers, geothermal pools, canyons, mountains and forests — as well as a giant caldera volcano. This race takes you just outside its western entrance, along dirt roads and trails in the nearby Gallatin National Forest.

Get ready for a fast, scenic race that takes you through Utah’s spectacular Bryce Canyon National Park, a geologic wonder that lures visitors from around the world with its incredible red rock formations, stunning views of amphitheater-like canyons, and wide-open skies.

Filled with rugged Pacific Northwest mountain terrain that encircles one of the country’s most majestic and beautiful lakes, Oregon’s Crater Lake National Park is the home to this late summer race, which promises breathtaking views at altitudes ranging from 5,980 to 7,850 feet above sea level.

Next post: The Best Half Marathons Around America’s Natural Wonders

Previous post: Calendar of the 2023 National Park Half Marathons