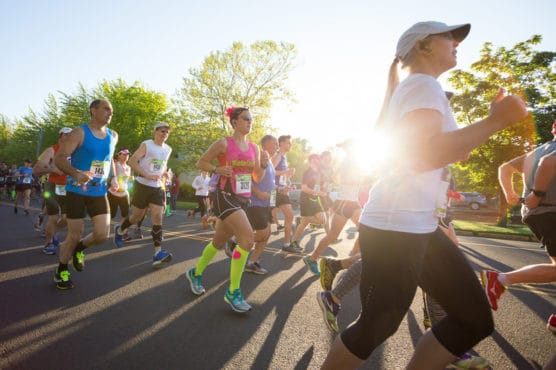 Runners make their way along the streets of Eugene, Ore., at the Eugene Marathon. (© Joshua Rainey | Dreamstime)

The mountains of this university town along the banks of the Monongahela River beckon runners each year as summer is turning to fall for this half marathon, which starts on the campus of West Virginia University.

You’ll get to soak up the atmosphere of this beautiful college town near the Alleghenies and the Shenandoah Valley at this race, which unfolds just outside the Virginia Tech campus along paved biking and running paths.

Run in the foothills of the Blue Ridge Mountains, at the home of the Thomas Jefferson-designed University of Virginia campus during the fall when the fall foliage should be around its peak, at this out-and-back race.

Long stretches along the wide, scenic Wabash River are a signature of this race, which runs at the home of Purdue University along an out-and-back loop course with a combination of hills and flat stretches both through the university campus as well as several city parks.

There’s probably no more iconic college town in America than Athens, Georgia, the home of the University of Georgia. Here, you’ll take in the unique architecture, neighborhoods and the rolling green spaces of the ‘Classic City,’ and run past Sanford Stadium, the home of the Bulldogs.

Set among the mountainous green terrain of northwest Arkansas, the home of the University of Arkansas Razorbacks football team plays host to a race takes runners through the university campus and the city at large.

Get ready for a run through the heart of one of New England’s most picturesque towns at this fall race in Massachusetts’ Connecticut River Valley, which is home to three of the five liberal arts colleges in the famed Five College Consortium.

If you’ve ever seen the 2006 film “We Are Marshall,” then you have an excellent picture of what this race is like for the thundering herd of runners along its green, tree-lined campus — a fast, flat run that race organizers say is a “perfect” qualifier for Boston.

World-renowned Princeton University (pictured in the photo above) served as the filming location for 2001’s Academy Award-winning “A Beautiful Mind” and was also the home of Albert Einstein in his later years. The race will even take you by his house.

You’ll run through one of the most famous college campuses in America at this race, where student protests played a pivotal role in the civil rights and Vietnam War debates of the 1960s and 70s, and run through some of the city’s and the university’s most iconic and scenic spots.

Set for its 8th annual running this year, this race takes runners on a winding tour of the home of the “Aggies,” through the campus of Texas A&M University and a series of local parks and shaded neighborhood streets in College Station.

Set for its inaugural running along the streets of the University of California-Los Angeles and the neighborhoods just beyond it, this all-new race features an out-and-back course that starts in the heart of the university campus.

What race organizers say is the largest college campus in the world (at 28,000 acres) is the setting for this race, which takes runners on a tour of this college’s hilly, wooded campus set in the foothills of the Appalachian mountains.

The organizers say it’s “the hardest half-marathon in the state of Texas,” and many runners say it’s true. Following a circuitous out-and-back loop, this race that takes runners from the stately, tree-lined campus of Baylor University on a tour of the city along the Brazos River.

Run through America’s first military academy at this race — as well as an important part of American history, the place that Thomas Jefferson helped create with one of his first official acts as president in 1801 and was hugely influential in the development of higher education in the U.S.

Starting from Assembly Hall on the University of Illinois campus, this race follows a winding loop through the city, all the way in toward the finish line on the 50-yard line at the University’s Memorial Stadium, the home of the “Fighting Illini.”

17) Eugene Half Marathon • Eugene, OR

Runners get a chance to trek through Oregon’s “Emerald City” at this race, which runs through several of the city’s urban parks, the campus of the University of Oregon and across the Willamette River.

Designed as a fundraiser for nonprofits like the South Bend Center for the Homeless and the Michiana Down Syndrome, which serves people and families living with Down Syndrome, the Holy Half Marathon unfolds through the campus made famous on-screen in 1993’s “Rudy.”

This double-loop race begins and ends on the University of Charleston campus, a small private university that’s home to just over 2,000 students. Fast and flat, the race course hugs the Kanawha River and is virtually free of hills, making it the perfect event to notch a PR after a hard winter.

Rolling green hills, quaint New England streets and a college town atmosphere are just a few of the charms of this annual springtime race, nicknamed “The Sweetest Half.”

You’ll run along the Swamp Rabbit Trail, the nearly 20-mile-long greenway trail built on an old railroad corridor that connects Greenville with the nearby town of Travelers Rest, at this race that also runs through the campus of Furman University.

Next post: 13 Thoughts a Runner Has Before a Race