22 Countryside Half Marathons Across the U.S. 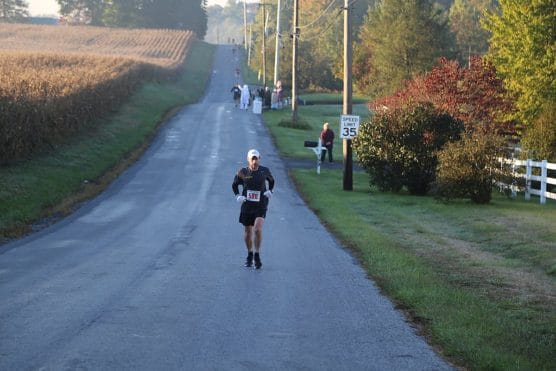 Runners make their way along rural roads in Pennsylvania at the Mushroom Cap Half Marathon.

“Running is a thing worth doing not because of the future rewards it bestows, but because of how it feeds our bodies and minds and souls in the present.” — Kevin Nelson

Run along the rolling country roads just outside this one-square-mile borough in southeastern Pennsylvania that’s become world-famous as the “Mushroom Capital of the World,” whose mushroom farmers produce more than a million pounds of the humble fungi every week.

Single-track trails, challenging technical trails and stretches through a tunnel and across a river — not just over a bridge, but actually through the water in the river — await runners at this race, which unfolds along these and much more within Connecticut’s Steep Rock Preserve.

Get ready to run through what locals call “the friendliest town in the South” at a race that pulls off a rare feat — it’s run through the mountains of western North Carolina but it features some of the flattest terrain you can find at a mountain race.

Located in the heart of Ohio’s Amish country, surrounded by Amish villages and gorgeous rolling country hills and farms, Berlin offers up challenging hills especially in the first half of this race, which starts at an Amish farm.

Filled with scenic farmland, vineyards and rural country roads, this race offers some challenging hills as well as beautiful pastoral views of the Texas Hill Country, which lies just a short drive from nearby Austin.

You’ll run a hilly route through the South Texas countryside at this early winter race, from the start and finish line areas at the Travis County Expo Center all the way around Decker Lake and back.

With more than 20,000 acres of rural grasslands, the Caddo and Lyndon B. Johnson National Grasslands are the home of this race, where you’ll need to be ready to run across streams, through muddy bogs, as well as sand and underbrush.

A stunningly gorgeous run through the canyon country of southeastern Utah awaits at this race,  which unfolds along an ancient geological formation that stretches some 80 miles across the Colorado Plateau between northern Arizona and the foothills of the Abajo Mountains.

Playfully described by organizers as a course that’s “flatter than Pike’s Peak,” this race takes runners along the hilly country roads and city streets in and around Falmouth, along an out-and-back course that starts and finishes at the intersection of Shelby and Main Streets in Falmouth.

Filled with a combination of pristine prairie grasses and hilly sand dunes that lie atop the massive Ogallala Aquifer, the region known as the Sandhills of Nebraska plays host to this race each year as spring is giving way to summer.

Run in a small town in Vermont’s Northeast Kingdom region, just a short drive from the Canadian border, the Kingdom Run unfolds along an easy-on-the-feet dirt road from start to finish, and welcomes both runners and walkers in all three race distances.

Quiet rural roads marked by hilly climbs along the roadways of rural northern Virginia — surrounded by the foothills of the Blue Ridge Mountains and the vistas of Shenandoah National Park off in the distance — await runners at this late summer race.

You’ll get the chance to trek along glacier-carved terrain that’s more than 10,000 years old at this event, which runs through the Lapham Peak unit of the Kettle Moraine State Forest, along an out-and-back loop route along the Moraine Ridge trail.

Get ready for a scenic, winding out-and-back course that starts and finishes at Virginia’s Tarara Winery, which lies on more than 470 acres along the foothills of the Catoctin Mountains on the Potomac River just north of Leesburg.

The red, orange and yellow-toned hues of the abundant fall leaves are on display every year at this event, an early-fall road race that takes runners through the winding hills and backwoods forest lands of Minnesota’s Chippewa National Forest.

You’ll follow a loop route through the Amish farm country at this race, along rolling country roads in and around this small village of roughly 300 residents whose history dates all the way back to the early 1730s, when it was founded by small communities of Quakers and Mennonites.

Known for its beautiful rolling green hills and horse farms, this central Virginia city of just over 8,000 souls plays host to this late-summer race, which unfolds entirely on the 31-mile-long High Bridge Trail, and takes runners across the famed bridge itself.

With a course that takes runners over the gentle rolling hills of Carroll County in the center of the northern Maryland countryside, this race features some of the lowest entry fees of any race in the country.

Challenging climbs along scenic mountain trails as well as long stretches along lakeside roads just north of Lake Tahoe in Northern California await runners at this race, which marks its third annual running in 2018.

20) Rails to Trails Half Marathon

Known for its steady and challenging uphill stretches, this race takes runners and walkers along a former railroad that’s been converted into a 32-mile paved recreational trail through the small towns and countryside areas of southwestern Wisconsin.

The foothills of the Colorado Front Range Mountains are the backdrop along the course at this race, which takes runners on a mostly off-road course through the countryside just north of the city, along mostly dirt roads and quiet rural lanes.

Nestled in the heart of Kentucky’s bluegrass country — at the midpoint of the railroad line between the cities of Lexington and Frankfort — Midway hosts this early fall race along a route that shows off the rolling green hills of its thoroughbred horse farms and rural countryside.

Next post: 23 Snowy Half Marathons to Warm Up Your Winter