4 Reasons to Stay Local When You Run a Goal Race 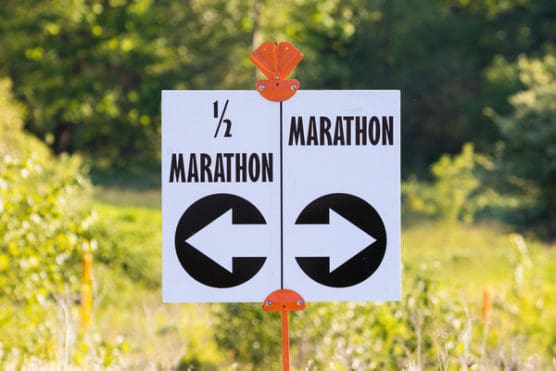 Running is a great sport for many reasons. One reason being, you can always find a new town or city to race in. Personally, I’ve been to many different cities including Phoenix, Dallas, or Carlsbad, simply to run!

But that doesn’t mean you have to travel for every race! One of my all-time favorite races, and also the half marathon I’ve run the most, is in my hometown of Virginia Beach: the Shamrock Half!

Since I grew up in Virginia, I know the area, food situation, and I know the course inside and out. I know there are a couple of small inclines, but the race is mostly flat with the last mile staring at King Neptune himself. Every year, I know people both on and off the course.

In short, it’s always a great race, but for me, it’s also a low-stress race. Even though traveling is fun, racing a goal race in your local area is a great idea. Plus, chances are you’ll know friends or volunteers on course!

Four reasons why you should too:

Let’s face it, if you already know the area you know the best food, restaurants, or you can eat at home. It takes away the stress and worry of trying something new and then “what if.”

If you’ve ever had digestion problems because you tried something new the night before a race, you know that is something you hope to never deal with again.

You can run the course

Many big races have training groups, or race simulation days on the course itself. When my husband and I lived in Alabama, there were many simulation race days for the Mercedes Half and Full Marathon in Birmingham.

The local running store took a group run of runners (when we went, there were 100+ people) and led us on the actual race course. I’m glad we ran the course because I had no idea Birmingham was that hilly!

We all know running is one of the cheaper sports, but it is by no means cheap. Yes, you truly only need shoes, but as runners, we know there is much more to the sport than “shoes.”

Traveling to a race can be expensive. For instance, Boston or the New York City marathon alone can costs runners upwards of thousands when you total airfare, lodging, plus the race itself!

By running locally, you can save money for more gear or another race or even be the adult you should be and just save money!

Many races have training groups for the race so you can find a partner or buddy! Even if the race doesn’t, race courses can be found online, and you can run the course by yourself. That way you get course-specific training!

Traveling can be exhausting. Before my second marathon, the Phoenix marathon, my flight was delayed. I got in around 3:00 AM and was exhausted.

While I had a full day to try and catch up on sleep, it wasn’t enough and I started the race tired. By staying local, you take the travel factor out and can rest and relax more.

Staying local can be just as fun as traveling to a new destination for a race. So tell us: Are you more likely to stay local for a goal race or travel somewhere new?

Hollie Sick is an avid runner who’s completed more than 40 half marathons. Read her blog, or follow her on Facebook.

Next post: 12 Half Marathons That Run Through Tunnels in 2018

Previous post: 8 Common Running Injuries & How to Heal Them