5 Things Runners Get Sick of Hearing

by Carissa Liebowitz on December 2, 2014 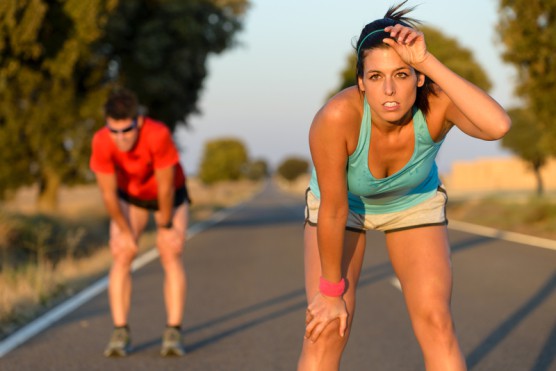 There is always a possibility that a runner will experience an issue with patellafemoral pain syndrome. Commonly known as runner’s knee, this inflammation of the cartilage under the kneecap is a relatively common ailment.

However, this is due to biomechanical issues in conjunction with a lack of strength training in nearby muscles. Cartilage naturally decreases with age, not with impact. Runners are actually less likely to develop arthritis in the knees than non-runners. So there!

2) “I would only run if something was chasing me.”

Well, I guess we know who will survive the zombie apocalypse! A far more likely scenario is that running will improve your ability to do everyday tasks such as climbing stairs and household chores. We’ll maybe let it slide if you sweat hard in a different athletic endeavor, but we don’t want to hear about you only being motivated by an impending bear attack.

There is actually one male and female that wins every race. But for the rest of us, running a race is not about breaking the tape. Heck, sometimes it’s not even about the time at all. Keep in mind that the person asking this question is either incredibly clueless (forgivable) or a sarcastic jerk.

Unless faced with dangerous weather conditions, dedicated runners will get their miles in no matter what. There are very few “perfect” running days in a calendar year anyway, so battling the elements becomes just as much a part of the task as battling the miles. So while you’re roasting poolside or shivering at a December football game, we’ll be busy kicking ass.

Confession: we actually like this one. Nothing makes us feel more immortal than to complete a long run without dying. We likely worked running into conversation shamelessly so we could impress you. No one has to know that this long run included stopping 7 times to rest while pretending to retie already perfectly tied shoelaces.

Next post: 5 Ways to Make the ‘Dreadmill’ More Bearable

Previous post: Running Outreach Helps Homeless Get ‘Back on Their Feet in No Time’ By the Thousands