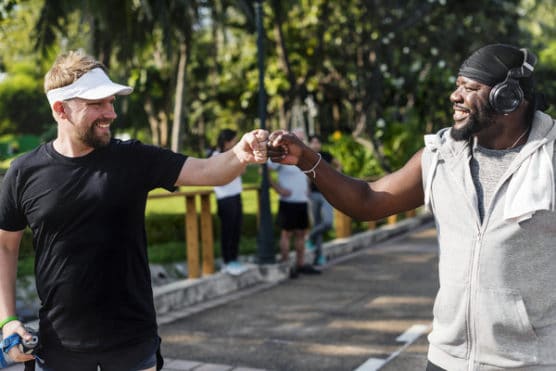 One of the great things about running is that it can be a completely solo activity or it can be done with friends. Some people prefer the social and safety aspect of running with friends and a little extra accountability never hurt anyone.


But where do runners find other runners besides just bumping into them while they run? While I actually have made running friends that way (!), there are plenty of options for finding a buddy who is willing to share some miles.

Whether it is a more formal club like an affiliate with a city or store or simply a group of like-minded people, there is likely an option near you in even smaller towns.

Running clubs might feel a bit intimidating to introverts, but most groups are happy to have new members as people drop off for various reasons. It might take a few outings to get to know people, but it is probably the easiest and safest way to make running friends.

If you sign up for a few local races, you will likely see the same faces over and over again. Some people are all business when it comes to racing, but there are plenty who go for the social aspect as well.

Other runners love to talk about running (duh!) so striking up a conversation and making friends is usually easy.

Other volunteers are usually friendly by nature and working together at a race is a great way to get to know someone. Whether you are working packet picket, a hydration stop, or the finish line, you’ll likely have a bit of down time. If they are local and like to run, ask them if they’d like company some time.

Though some people might balk at the idea of making friends on an app, Strava has actually netted me a few local running friends. Seeing people who run similar segments or races can open a conversation and eventually have led to group runs in the area. Of course, use your best judgement with regards to privacy and safety.

Similar to Strava, I have made real-life running friends thanks to Instagram. Whether following a race hashtag and discovering someone I met mid-race or finding a new friend through my own network of buddies, Instagram has proven to be a fun way to meet fellow runners.

And of course, as with Strava, use your best judgement with the privacy and safety thing.

For many runners, it is a lifelong journey. But for some, running comes in and out of their lives at various times. Your running network will always be changing and as people jump back into training or get ready for a race, be open to making those connections for people who need accountability.

Turn a friend into a runner

Maybe you have a friend who has always expressed interest in running, but never got into the habit long enough to become a runner. It’s likely you might have pushed them before, but perhaps they were intimidated by the commitment.

Get them started by meeting up just once a week and make it fun by grabbing a coffee or beer afterwards.

Next post: 23 Half Marathons to Plan Your Vacation Around

Previous post: What Running Stores Want You to Know