More than 3,000 runners cross the finish line each year in the half-marathon alone at the late wintertime running of Birmingham’s Mercedes Marathon, Half Marathon, & Relay, making the event’s 13.1-mile race one of the southeast’s most popular half marathon events.


Run along a course that features a combination of terrain that’s fast and flat as well as hilly and more challenging — and watched over by the famed Vulcan Statue from the height of Red Mountain just south of downtown.

Both the half and the full marathons in this event share the same starting line, near the Birmingham Museum of Art downtown. From there, runners and walkers in the half marathon (the race is open to both) follow the course as it winds along 8th Avenue, 24th Street and 11th Avenue before turning onto 19th Street, which runners take for a brief straightaway before heading into the campus of the University of Alabama-Birmingham.

After running for a few blocks along 1st Avenue, runners then head south through the university’s campus, which they take all the way through and head to Green Springs Avenue, which begins the hillier and more challenging section of the course.

Runners will encounter the race’s peak elevation as they’re passing through miles 8 and 9, which take them through the area of Birmingham known as Highland Park, past a number of smaller local city parks like Hanover Park and along the edges of the Highland Park Golf Course.

The race winds through curving neighborhood streets along this stretch, as the course elevation begins descending again back down to around 600 feet above sea level between mile markers 10 and 12. The home stretch of the race takes the field back into downtown again, for the finish at the museum.

If you’re running the full marathon, be sure to stay ahead of the Mercedes Marathon’s famous “balloon lady” — she’s the official last finisher of the marathon (the 26.2-mile race), and if you’re not in front of her by the time you reach the split just before mile 13, you’ll be directed onto the half marathon route. 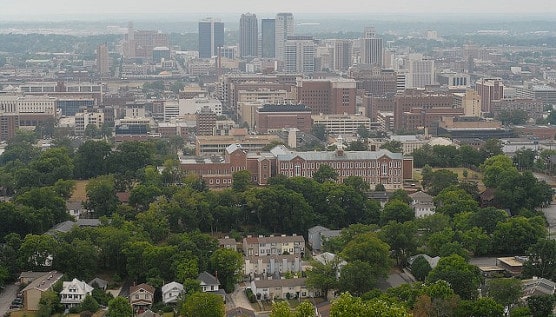 View of Birmingham, Ala., from atop Red Mountain. (Photo by Bill Blevins/flickr)

Known for its mild to cool (and sometimes cold) weather conditions in the fall and winter as well as its hot, humid summers, the city of Birmingham tends to experience cool weather in the late weeks of winter, with moderate precipitation.

In February, temperatures average between 36°F and 58°F, while precipitation totals average just over 4.2 inches, making February Birmingham’s fifth-driest month of the year. On the day of the race (Feb. 16), the average low is 37°F and the average high is 60°F.

See the race route map for the Mercedes Half Marathon here.

To reserve your spot in the winter 2020 running of Birmingham’s Mercedes Marathon, Half Marathon or Relay race, register online at RunSignUp.com here.

Ever run in the Mercedes Half Marathon? Share your impressions here, or post your review in the Comments box below.