Runners trek mostly fast and flat streets through tree-lined residential neighborhoods for nearly the entire course at Prattville’s Centerpoint Half Marathon, 5K and one-mile race, which is set for its annual running this fall.

The race, which welcomes more than 600 runners each year, follows an out-and-back course that starts and finishes at the Willis Bradford YMCA on South McQueen Smith Road, near the intersection with Cobbs Ford Road. From there, runners follow a winding route filled with twists and turns into the neighborhoods to the north and west of the YMCA.

This small southern Alabama city, which lies just a short drive north from downtown Montgomery, has become something of a golf destination over the past decade with the popularity of its Capitol Hill golf courses, part of the state’s Robert Trent Jones Golf Trail.

The trail stretches across the state and today counts 11 courses clustered at sites ranging from courses in Muscle Shoals in the state’s northwest corner all the way south to Point Clear and Mobile, along Alabama’s Gulf coastline.

The Centerpoint Half and 5K races are hosted and organized by Prattville’s Centerpoint Fellowship Church, and the course brings runners to the finish line right back where they started, in the parking lot of the YMCA, where the post-race festivities will get going by 8:30 AM.

Course time limit for the 5K race is one hour, while runners in the half marathon will have four hours to complete their race. 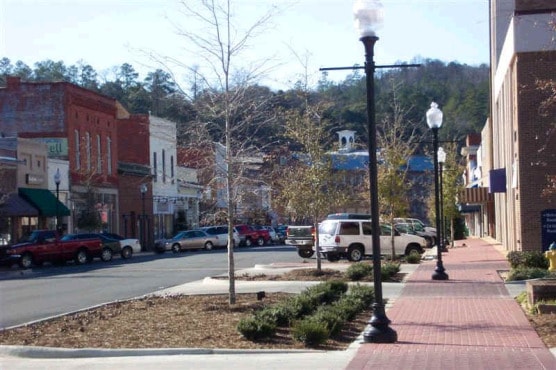 Downtown Prattville, Ala. (Photo by Wikimedia)

Located in central southern Alabama, about 15 miles northwest of downtown Montgomery and roughly 80 miles southeast of Birmingham, Prattville typically sees cool to mild temperatures, which also has brought record temperatures as low as 28 degrees (in 1987) and as high as 94 degrees (in 2007).

See the race route map for the Centerpoint Half Marathon here.

To reserve your spot in the 2022 running of Prattville’s Centerpoint Half Marathon or Centerpoint 5K race, register online at the event website below.

Ever run in the Centerpoint Half Marathon? Share your impressions here, or post your review in the Comments box below.