Set to follow an out-and-back loop course that starts and finishes on the Alabama mainland and takes runners over onto the nearby island of Gulf Shores, the Gulf Coast Half Marathon starts at Lulu’s at Homeport, a bar and grill restaurant located just off Highway 59 near the intra-coastal waterway and Jack Edwards Airport.


From there, runners make their way onto Highway 59 and cross the bridge over the intracoastal waterway onto the island, and then head onto city streets that make a loop around West 19th Avenue, West 2nd Street and West Canal Drive.

Canal becomes East 24th Avenue as runners head east toward East 2nd Street, where they turn right and head south into Gulf State Park, where they’ll spend roughly the next five miles of the race.

The next stretch features some of the race’s most scenic miles as runners make a counter-clockwise loop around Shelby Lake, which lies in the center of the 6,150-acre state park, known for its white sand beaches, trails for walking and hiking, and especially the 900-acre lake in the middle of the park, a popular spot for fishing.

Once runners make it all the way around the lake — they’ll also run a stretch along Perdido Beach Boulevard, where they’ll see the waters of the Gulf of Mexico — they’ll return to East 2nd Street and head north.

Runners spend the remainder of the course basically heading back in reverse along the route they ran earlier in the race, retracing their steps all the way back across the intra-coastal waterway back to Lulu’s, where the race finish line and post-race party will be waiting. 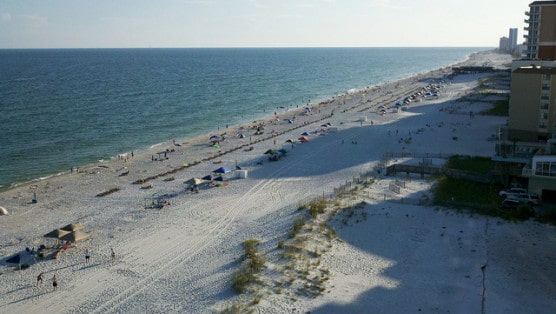 The beach at Gulf Shores, Alabama, in 2011. (Photo by Charles Hutchinson/flickr)

Nestled along the Gulf of Mexico coastline of southwestern Alabama, just across the bay from Mobile and roughly 30 miles southwest of Pensacola, Fla., Gulf Shores typically sees cool to mild weather in March, which has brought record temperatures here as low as 18ºF  (in 1943) and as high as 89ºF (in 1939).

See the race route map for the Gulf Coast Half Marathon at Gulf Shores here.

Yes. The course time limit is 4 hours, which means participants need to keep a pace of 18 minutes per mile or faster.

To reserve your spot in the 2017 running of the Gulf Coast Half Marathon at Gulf Shores, register online at SignMeUp.com here.

Ever run in the Gulf Coast Half Marathon at Gulf Shores? Share your impressions here, or post your review in the Comments below.