A mostly flat – with a few hills sprinkled in – run awaits at Birmingham’s annual Magic City Half Marathon & 5K, which in its inaugural year went by the name of the Ruben Studdard Half Marathon, in honor of the former “American Idol” winner who got the race started back in 2011.

Today it’s part of an event-filled weekend that also features a fitness festival and a “Linn Park Lap” short run for families on the day of the race.

Both the Magic City Half Marathon and the 5K take runners through (mostly) flat streets of Birmingham, Ala., which got its nickname the “Magic City” thanks to its rapid industrialization in the first half of the 20th century, when it grew from a sleepy southern city into an iron and later a steel powerhouse, and was alongside Atlanta of the South’s most important industrial centers.

Runners in this November’s half marathon — 2023 marks the event’s 11th annual running, and is open to maximum of 1,500 entrants — follow an out-and-back course that starts and finishes at Birmingham’s Regions Field, on First Avenue South. From there, runners head east, in the direction of Avondale Park

Runners make their way away from the aging 71,000-seat stadium down First Avenue South all the way to 42nd Street South. Once there, they turn left again onto Fifth Avenue South, which takes runners past Avondale Park.

The course continues along Fifth Avenue South until reaching the University of Alabama at Birmingham campus, where runners will weave their way around the various schools therein before making their way back to the stadium.

The course isn’t done yet, though — there’s a second loop for the half marathoners that repeats the stretches along First and Fifth Avenues, finishing back at Regions Field. 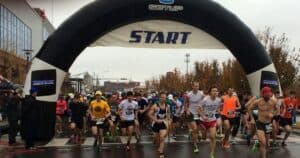 Located in central Alabama, about 250 miles northeast of Mobile and roughly 145 miles west of Atlanta, Ga., Birmingham typically sees November temperatures that average between 42°F and 65°F, while precipitation amounts average just over 4.6 inches for the month, making November the city’s sixth-wettest month of the year.

Magic City Half Marathon Past Results

To reserve your spot in the 2023 running of the Magic City Half Marathon & 5K, register online at RunSignUp.com here.