Set for its 14th annual running in March 2022, the Montgomery Half Marathon & 5K take runners through the heart of the capital city of the state that itself is known as the “Heart of Dixie,” along a route that unfolds through several of the city’s historic sites and districts, and brings runners past the state capitol building in the home stretch.

Runners start (and finish) the race near Montgomery’s Riverfront Park, which overlooks the winding Alabama River in the city’s northwestern corner.

From the intersection of Water and Commerce Streets, runners head out from the starting area and make their way east along Jefferson Street, which takes them past the city’s Oakwood Cemetery, where some of the city’s most notable residents are laid to rest and is the final resting place of one of the city’s most famous sons (and one of country music’s biggest stars), Hank Williams Sr.

Once they make their way past Oakwood Cemetery, runners continue on eastward along Upper Wetumpka Road and Yancey Avenue, making quick turns on Pennsylvania Avenue and Winona Avenue before turning left and heading south along Capitol Parkway, which begins a stretch that brings runners southward toward Oak Park and the campuses of Montgomery’s Alabama State University and Huntingdon College.

As the course unfolds, runners will discover that they’re basically making their way along a clockwise loop through the heart of the city’s downtown areas, as the college campus areas give way to neighborhoods and districts like Old Cloverdale and Edgewood, and later to the section of the city known as the Garden District.

Here, runners enter the last few miles of the race, which bring them northward along Perry Street and Bainbridge Street up to the Alabama State Capitol building, whose gleaming white dome and round columns bring to mind buildings you’d find in Washington, D.C.

After the stretch past the state capitol, runners have less than a mile to go as they pass the Martin Luther King Jr. Memorial on Dexter Avenue and head toward the race finish line, which runners will cross inside the 7,000-seat Riverwalk Stadium, the home of Minor League Baseball’s Montgomery Biscuits, the Class AA affiliate of the Tampa Bay Rays. 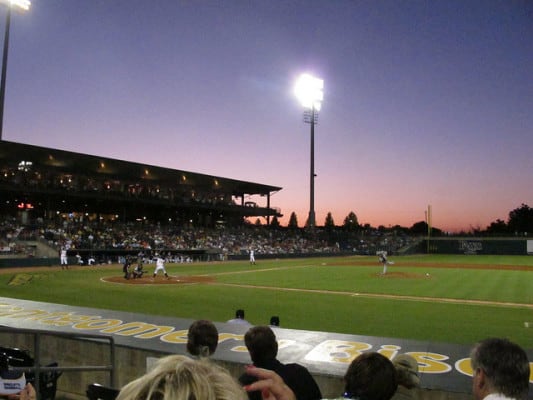 A game at the Montgomery Biscuits stadium in Montgomery, Alabama. (Photo by StretchyBill/flickr)

Located in the lower, eastern part of Alabama, just over 92 miles south of Birmingham and roughly 80 miles west of Columbus, Ga., Montgomery typically sees its wettest weather of the year in March, which has brought record temperatures here as low as 17 degrees (in 1993) and as high as 90 degrees (in 1929).

See the race route map for the Montgomery Half Marathon here.

To reserve your spot in the March 2022 running of the Montgomery Half Marathon, register online at Active.com here.

Ever run in the Montgomery Half Marathon? Share your impressions here, or post your review in the Comments below.