Get ready for a run along the rolling hills of one of Alabama’s treasures if you’re a golfer (or a runner), as you’ll be running along one of the series of courses on the state’s famed Robert Trent Jones Golf Trail at this December half marathon, at Dothan’s Highland Oaks Golf Course.


The race, proceeds from which will go to benefit the locally-based Wiregrass Habitat for Humanity, will follow an out-and-back course that starts and finishes in front of the Highland Oaks clubhouse.

From there, the course unfolds through all four of the nine-hole courses that make up Highland Oaks — Magnolia, Highlands, Marshwood and the “Short Course,” a nine-hole par 3 course — which has been named one of the nation’s best “Places to Play” by Golf Digest magazine.

You’ll run mostly along the cart paths of all 36 holes at Highland Oaks, as well as three additional miles on the roads that surround the course.

While you can expect some rolling hills and perhaps a few steep hills along the course, most of the hills are gently rolling and there are no big changes in elevation — the lowest point on the half marathon route lies at just over 210 feet above sea level, while the highest tops out at just over 270 feet.

Organizers say they plan to start runners off in waves to relieve any congestion on the course — the first group will leave the starting line at 7:30 AM, followed by successive groups 2 minutes apart. 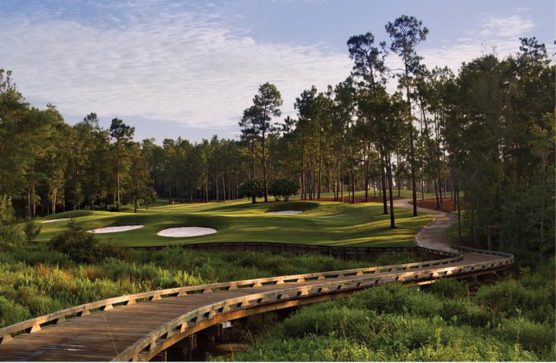 What the course (and the half marathon route) looks like at Dothan’s Highland Oaks Golf Course, the setting for December 2017’s Running Highland Oaks Half Marathon.

Nestled in the state’s southeastern corner, about 20 miles west of the Georgia state line and about 16 miles north of Alabama’s border with Florida, Dothan typically sees cool to mild (and occasionally rainy) weather in December, with temperatures that average between the upper 30s and the low 60s.

See the race route map for the Running Highland Oaks Half Marathon here.

To reserve your spot in the 2017 running of Dothan’s Running Highland Oaks Half Marathon, register online at ItsYourRace.com here.

Ever run in the Running Highland Oaks Half Marathon? Share your impressions here, as well as anything you learned about the race that you think other runners/walkers should know.