The runners who’ve crossed the finish line the past few years at the Skagway Marathon know why this race advertises itself with the tagline, “5% tough, 95% brutal.” With a course that unfolds hills, mountains, portions of glaciers, and through forests and past streams, this race isn’t the one to choose if you’re looking to PR.


Instead, it’s one you’ll choose when you’re looking for an adventure, one that will take you along the Main Street of this small southeastern Alaska city and into the mountainous wilderness that overlooks its city streets, neighborhoods and the waters of Smugglers Cove below.

Nestled along the Alaskan panhandle, Skagway was inhabited by the Tlingit people in prehistoric times, and later experienced a boom during the Gold Rush years, which left behind a railroad called the White Pass and Yukon Route that still operates during the summer months, mainly for tourists now.

Runners will begin their out-and-back race close to the Skagway port along Broadway. From there, they’ll head into town, with the first mile taking them northeast on Broadway, followed by a left onto 2nd Street.

Two blocks later, the course heads northeast along Main Street, taking runners past a series of restaurants, shops and bed and breakfast inns that are all typically filled up during Skagway’s summer tourist season.

Once they reach the edge of town, runners make a left onto State Street and begin to ascend into the wilderness. They will take the Klondike Highway heading northwest and watch the town fade away. Racers will have a chance to hydrate at the first aid station located along the Klondike Highway.

At the intersection of Dyea Road, runners will begin to loop around and head for higher elevation. Dyea is a former town located at the convergence of the Taiya River and Taiya Inlet.

The port was much shallower in Dyea and provided better access to those attempting to make a journey to the gold fields. Half-marathoners will be able to hydrate at an aid station along Dyea Road. They will make a long journey around Nahku Bay, but have an opportunity to enjoy wonderful views of the water. 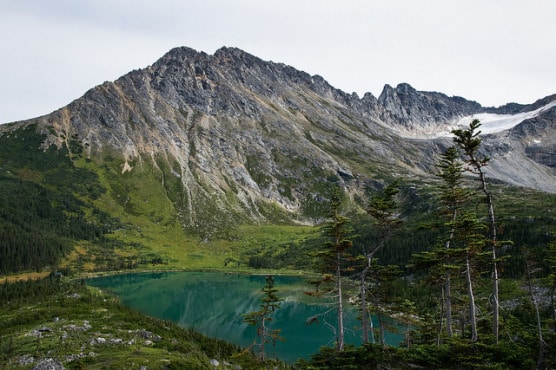 The turnaround point for the race is on the peninsula located between Nahku Bay and the tip of Smugglers Cove; from there, racers retrace their steps back to the finish line along the same roads they traveled.

Skagway has a humid continental climate which is unusual for being located so far north. June temperatures average in the 60s for the highs and in the 40s for the lows. June is typically the city’s driest month of the year, so runners can expect very little rain during the race.

See the race route map for the Skagway Half Marathon here.

To reserve your spot in the 2020 running of the Skagway Marathon or Half Marathon, visit the event website below.

Ever run in the Skagway Half Marathon? Share your impressions here, or post your review in the Comments below.