Runners will make their way down from the hills mountains of Usery Mountain Regional Park overlooking this eastern suburb of the Phoenix metropolitan area and into the city streets and neighborhoods of Mesa at the Sprouts Mesa Marathon, Half Marathon, 10K & Kids’ 1K, which makes its 11th annual running in 2023.


Set to take place at a time of year when temperatures should only reach the upper 60s at most while those running the half marathon are out on the course — which is a wonderful thing considering that Mesa regularly reaches triple digits in the summertime — the race follows the second half of the full marathon course, which is a USA Track & Field certified course for qualifying for the Boston Marathon.

While the starting line for the full marathon lies in Usery Mountain Regional Park — a roughly 3,600-acre park here in the lower Sonoran Desert on the eastern side of what is known as the East Valley, near both the Goldfield Mountains and the Tonto Regional Forest — the starting line for the half marathon lies at the mid-point of the 26.2-mile route, on East McDowell Road near Falcon Field airport and Boeing.

From there, runners make their way through residential neighborhoods and through parts of the Escobedo historic district, where they’ll run past the Arizona Museum of Natural History and the Fitch baseball fields. Overall, the course unfolds along a mostly gentle downhill descent throughout the race’s 13.1 miles, dropping about 350 feet in elevation from the starting line to the finish line, which lies at the Riverview Shopping Center on Bass Pro Drive.

At the 2016 race, more than 7,500 runners crossed the finish line in all races combined, including just over 4,100 finishers in the half marathon. 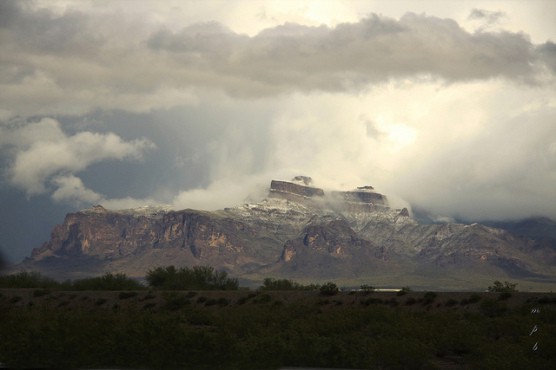 View of the mountains surrounding Mesa, Ariz. (Photo by minniemouseaunt/flickr)

Located in central southern Arizona, about 15 miles east of downtown Phoenix, Mesa typically sees March temperatures that average between 45°F and 71°F, while rainfall totals average just over 1 inch for the month — the city’s third-highest of the year, but still largely dry.

See the race route map for the Sprouts Mesa Half Marathon here.

To reserve your spot in any of the race distances at the late winter 2023 running of the Mesa Marathon or Half Marathon, register online at the event website here.

Ever run in the Mesa Half Marathon? Share your impressions here, or post your review in the Comments box below.