The Lost Dutchman Marathon is a beautifully scenic and very challenging race that has won raves from publications like Runner’s World magazine (which called it one of the “Best Little Marathons in the Country”) to AZCentral.com, which named it 2005’s best marathon for serious runners, this race offers a rugged desert course and what is usually a smaller field of participants than bigger-city races.

From the starting line at Prospector Park near downtown Apache Junction, the half marathon portion of the race takes runners eastward toward the Superstition Mountains that tower over the city on its eastern side.

Mostly flat for the first four miles that unfold through the city, the course turns hilly and more challenging as it reaches Mountain View Road, Geronimo Road and East Broadway Avenue, which contain some stretches of dirt road.

The elevation change for the course is mostly uphill for the first half and mostly downhill for the second half, including the half-marathon’s most significant hill around mile 10, when runners will see about a 50-ft. change.

Race organizers also impose no time limit for the half-marathon, which covers the final 6.55 miles of the full marathon route.

More than 2,100 runners crossed the finish line in the full marathon, half marathon, 10K and 8K races combined in 2016, including just over 700 finishers in the half marathon alone. 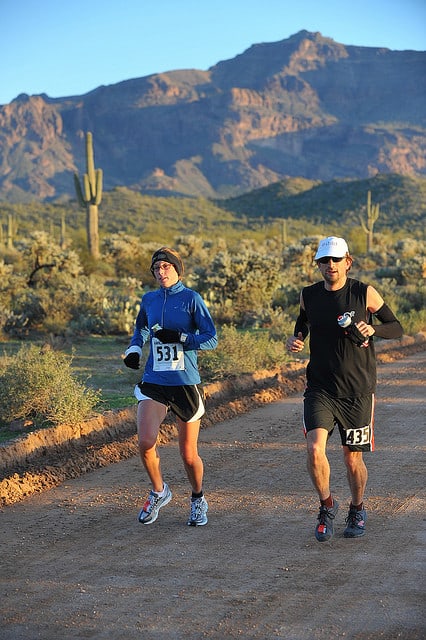 Runners in the 2010 Lost Dutchman Marathon. (Photo by John Roig/flickr)

Highly variable weather year-round is the norm in the Apache Junction area, which lies just to the east of Phoenix and Tempe in southern Arizona. February temperatures average between 42°F and 70°F, while rainfall is relatively low, averaging about 1.4 inches for the month.

See the race route map for the Lost Dutchman Half Marathon here.

To reserve your spot in any of the race distances at the late winter 2023 running of Apache Junction’s Lost Dutchman Marathon, register online at the race website below.

Ever run in the Lost Dutchman Half Marathon? Share your impressions here, or post your review in the Comments box below.