With a course that takes runners through commercial districts, residential neighborhoods and portions of the McDowell Sonoran Preserve — a 14,000-acre ecological preserve that lies just northeast of Scottsdale — the Run for Ryan House at DC Ranch features a half marathon, 10K, 5K and one-mile fun run that together draw several hundred to more than 1,000 runners every year.


The race is designed both as a running event for the local community as well as a fundraiser for Ryan House at DC Ranch, a center for pediatric palliative care that aims to re-create a home-like environment as much as possible for children facing life-threatening illnesses and their families, to assist them not only with their medical needs but also with spiritual and emotional care, especially for families with children dealing with end-of-life issues.

Runners participating in any of the four events in the race can, in addition to their entry fee, sign up as a fundraiser for the race to raise donations for the center during their training leading up to the event. The top fundraisers for the event are recognized in a special ceremony following the race.

The course for the race starts and finishes at the Village at Market Street near DC Ranch, and from there runners head out through the shopping village area onto North Pima Road, which they follow again out to Legacy Boulevard.

This begins a roughly three-and-a-half mile stretch that takes runners along Thompson Peak Parkway all the way southward past the preserve to McDowell Mountain Ranch Road, where runners turn left and then follow the curve of the road all the way east and north back around to Thompson Peak.

Next, runners turn right and head north back up Thompson Peak Parkway, where they turn left and head west. The stretch leads to the turn onto Desert Camp Drive, which runners follow westward as it curves around and intersects with North 90th Place. There’s a short stretch and then the route heads into the neighborhoods just south of the Market Street Village area.

The finish line for the race brings runners back into the area where they started. Runners can expect the steepest hills of the race to occur between miles 4 and 6, and then again between miles 10 and 11; the remainder of the course unfolds as an more gradual ascent (with some downhills) back in to the finish line area. 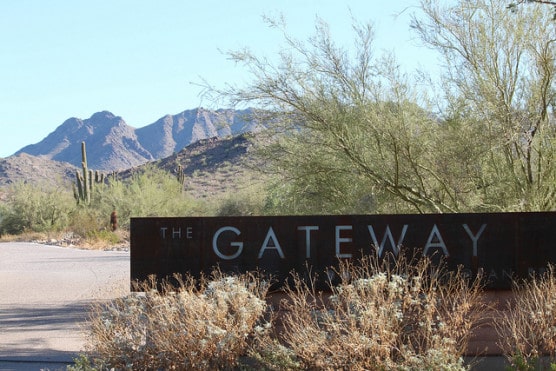 At the entrance to the McDowell Sonoran Preserve in Scottsdale, Arizona, which runners will pass by during the race. (Photo by Dru Bloomfield/flickr)

Located just north of the Phoenix-Tempe-Mesa metroplex here in southern central Arizona, the city of Scottsdale typically experiences warm and dry weather throughout most of the year, with very hot summers and usually very mild winter seasons.

See the race route map for the Run for Ryan House Half Marathon here.

To reserve your spot in the 2016 running of Scottsdale’s Run for Ryan House at DC Ranch Half Marathon, 10K or 5K race, register online at the event website here.

Ever run in the Run for Ryan House at DC Ranch Half Marathon? Share your impressions here, or post your review in the Comments below.