Set for its second annual running in the mid-spring this year, the Jack-n-Back Half Marathon takes runners up, over and beyond what organizers say is Arkansas’s Pikes Peak — the one and only Jack Mountain, which was purchased from International Paper Company in the early 1990s by the Ross Foundation, and has since become popular with hikers and mountain bikers from around central Arkansas.


Nestled in the foothills of the Ouachita Mountains, which take their name from the Choctaw word for “the country of large buffaloes,” Jack Mountain rises more than 900 feet above sea level along Highway 128, which runners will spend their entire 13.1 miles on during the race, just south of Lake Hamilton and the city of Hot Springs.

Runners start the race between the tiny, unincorporated community of Bismarck and nearby Malvern, at the intersection of Highways 128 and 84. From there, runners head north along 128 for the entire first half of the race, which takes them on a more than 520-ft. climb from the starting line elevation to the peak height of Jack Mountain on Highway 128.

The race keeps going along 128 even after runners have scaled the peak of the mountain, as they continue on toward the race’s half-way point where 128 meets up with Highway 290, near Mount Carmel Creek.

Once they make the turnaround, runners then head back south along 128, and climb more than 470 feet this time on their way up to the top of Jack Mountain a second time, before heading back down again on the way back to where they started.

Just over 80 runners crossed the finish line in 2014, with the 34-year-old winning runner finishing in 1:22:56, while the final finisher clocked in at 2:56:15. The race is open to both runners and walkers, and it’s also open to two-person and four-person relay teams. 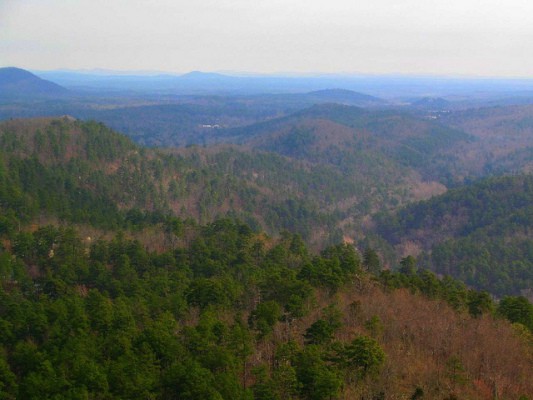 Located in unincorporated Hot Springs County, roughly 68 miles southwest of Arkansas’s capital in Little Rock, the tiny community of Bismarck lies the closest to the starting line, and typically sees April temperatures between 49ºF and 78ºF, and the month is usually the area’s fourth-wettest of the year.

See the race route map for the Jack-n-Back Half Marathon here.

To reserve your spot in the spring 2015 running of Arkansas’s Jack-n-Back Half Marathon, register online at Active.com here.

Ever run in the Jack-n-Back Half Marathon? Share your impressions here, or post your review in the Comments box below.