Set for its 11th annual running this year as winter gives way to spring, the Run Bentonville Half Marathon features a course that starts and finishes near the home of the original Walton “Five and Dime,” the first of the stores that became the Wal-Mart retail empire now known around the world.

Runners will get to experience a mix of city streets through this small city in northwest Arkansas, which has grown over the years as the world headquarters of Wal-Mart and now is home to offices from virtually every major retail supplier in the U.S. and around the world.

After the first few mostly flat miles through town and just outside the city, runners follow what is roughly a clockwise loop course around the edges of the city, a route that also features stretches along the tree-lined trails and hills to the north of town.

These stretches of the race are some of its most scenic, along tree-lined paved trails through the woods, and which coincide with what is perhaps the race’s steepest downhill stretch as runners are making their way from the city portion of the course into the trail areas north of town.

The race route follows north all the way to the intersection of North Walton Boulevard and Northwest A Street, and then takes runners southward along the trails back to the finish line at Bentonville Town Square.

Runners in the half marathon will have a course time limit of 4 hours to complete their race, as the course will close at 11:00 AM. 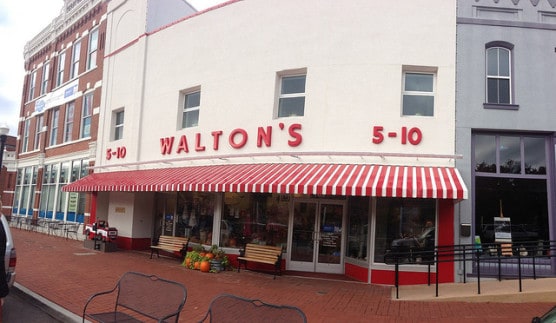 The original Walton Five and Dime in Bentonville, Arkansas, where the race starts. (Photo by Brad Holt/flickr)

Located in the northwestern corner of the state, just a short drive from both Fayetteville and the Ozark National Forest to the south, Bentonville typically sees cool (and sometimes cold, especially in the early morning) weather in early April, where temperatures typically range from the mid-40s to the low 70s.

See the race route map for the Run Bentonville Half Marathon here.

To reserve your spot in the early spring 2023 running of the Run Bentonville Half Marathon, 5K or fun run, register online at regwiz.io here.

Ever run in the Bentonville Half Marathon? Share your impressions here, or post your review in the Comments below.