Welcome to San Diego for America’s Finest City Half Marathon. Bright and sunny San Diego, famous for its year-round moderate temperatures and virtually cloudless skies, is the setting for this point-to-point road race that takes runners from the majestic views of the historic Cabrillo National Monument overlooking the Pacific Ocean and San Diego Bay to the green, expansive meadows of Balboa Park, whose 1,200 acres are home to 15 museums including the world-famous San Diego Zoo.

The course for the race takes runners entirely on paved surfaces through city streets, starting at the Cabrillo Monument. From there, the course takes runners down Cabrillo Memorial Drive through the Fort Rosencras National Cemetery, through an area that is one of the nation’s oldest military outposts, dating back to the 1850s.

Along this early stretch of the race, runners also pass the Old Point Loma Lighthouse, which stood watch over the bay for nearly 40 years until it was retired in 1891 due to the point’s constant fog, which obscured its light beacon. Today, the lighthouse remains largely as it was in the 1880s, and adds to the point’s authentic appeal.

Once runners descend the monument and Fort Rosencras area, the course next takes a turn through the Point Loma and La Playa neighborhoods, where spectators are usually out in droves to cheer on those running in the race, some even with hoses and sprinklers to cool everyone down.

As it makes its way through these districts and into the Harbor Island area, there’s usually plenty of distractions along the course to take runners’ minds off their 13.1-mile trek, from cheerleaders and belly dancers to the celebrity sightings that have been reported in recent years, including Oprah Winfrey.

Along the middle stretch of the race, which takes runners along North Harbor Drive and over onto Harbor Island, the scenery changes as the course runs past San Diego’s bayside international airport, giving runners plenty of views of the water and the planes coming in and taking off.

Still flat and fast through these miles, the course unfolds all the way around the edge of the bay, turning away from the water at Ash Street and heading back into residential areas on the last couple of miles’ approach to Balboa Park.

The last two-plus miles of the race, starting with the turn onto India Street and concluding with the finish line along Pan American Road inside the park, are mostly long, flat straightaways, which give runners a nice way to finish the course.

Once inside the park, the scenery is part of the reward, as the course turns onto El Prado and then Pan American Road, for the finish at the intersection with President’s Way, surrounded by the several museums runners pass on the way to cross the finish line. 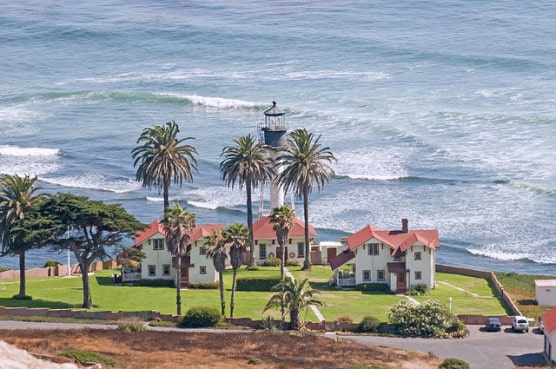 The old lighthouse along the shore near Cabrillo National Monument. (Photo by SD Dirk/flickr)

Known for its year-round mild weather conditions, with the occasional fog and marine layer near the ocean, San Diego’s weather is somewhat warmer in the summer than in the winter, though not by much. August has brought record temperatures in San Diego as low as 57°F (in 1944) and as high as 98°F (in 1955).

To reserve your spot in the late summer 2023 running of San Diego’s America’s Finest City Half Marathon or 5K Run/Walk race, register online at Events.com here.