Set for its 7th annual running here on the largest natural island in San Francisco Bay, the Angel Island Half Marathon & 5-mile race take runners on a looping trail run around Angel Island State Park, a place where you can see some of the most stunning views of San Francisco, the Marin Headlands and the rest of the Bay Area.

The island on which you’ll run has a history that dates back long before European settlers arrived, as the native Miwok people made their home here for seasonal hunting; it was also a stop for Spanish explorers like Juan Manuel de Ayala, who was one of the earliest to map the Bay Area.

In later years, the island has served as a military fort — there’s an installation at Fort McDowell on the eastern side of the island — as well as an immigration processing center for as many as a million immigrants from China and other countries, and even as a detention center for German and Japanese prisoners of war during World War II.

You’ll get to take in all this and more when you run the race starting from Ayala Cove, where the state park that now occupies most of the island is headquartered.

From the starting line overlooking the cove, you’ll follow a clockwise loop route for the half marathon, first along the outer park road that circles the island. Along the way, you’ll pass by the immigration station at China Cove, the quarry point in Fort McDowell, and several other campsites.

In the second half of the race, you’ll follow the trails that wind through the heart of the island, passing near the summit, which stands at just over 780 feet above sea level.

You may see other runners, cyclists, hikers and riders on horseback when you’re out on the course, organizers note, as it won’t be closed for the race — so just let them know you’re passing by with an “on the left!” as you run. 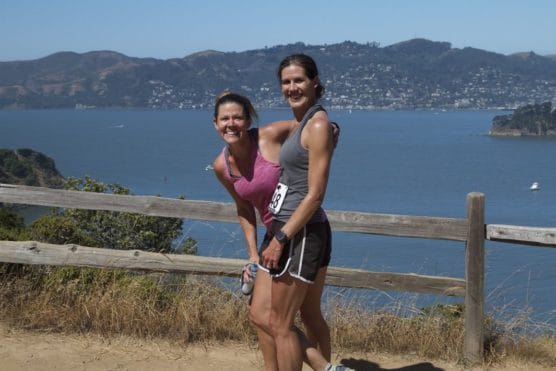 A pair of runners pause to take a photo on the trails within Angel Island State Park at last year’s Angel Island Half Marathon. (Courtesy Urban Coyote Racing) 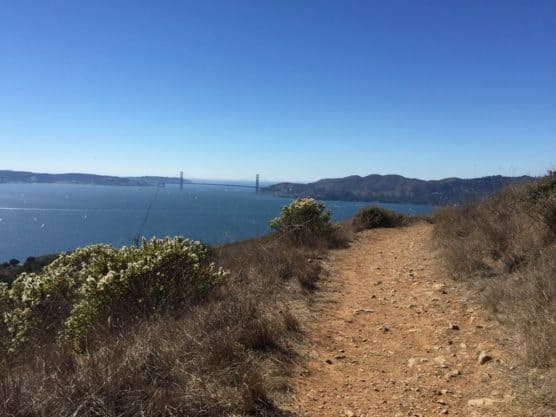 What the trails on the race route within Angel Island State Park look like.
(Courtesy Urban Coyote Racing)

Angel Island State Park lies just across the San Francisco Bay from Tiburon, which typically sees some of its warmest and driest weather of the year in June, as the area averages just under a quarter of an inch of precipitation for the month.

See the race route map for the Angel Island Half Marathon here.

To reserve your spot in the 2023 running of the Angel Island Half Marathon or 5-mile race, visit the event website here.

Ever run in the Angel Island Half Marathon? Share your impressions here, as well as anything you learned about the race that you think other runners/walkers should know.