Named one of the best international running events in the world by Let’s Do This and Runner’s World magazine, the Bay Bridge Half Marathon is notable also because it’s the only half marathon event to take runners across Oakland’s beautiful Bay Bridge, which connects the city with nearby San Francisco and is famous for its nightly LED display known as the Bay Lights.

Start in West Oakland. The race follows an out-and-back route that starts near the intersection of 3rd Street and Adeline in West Oakland, and from there heads west toward the harbor. You’ll run along 3rd, Mandela Parkway and 7th Street before turning onto Maritime Street, and then later onto Burma Road.

After the turn onto Burma, you’ll run onto the Bay Bridge Trail, which carries you across the bridge and over to Yerba Buena Island, taking in views of the Golden Gate Bridge and Alcatraz off in the distance along the way.

The stretch across the bridge offers up some of the most stunningly scenic views of the Bay Area, as — if the weather is clear — you’ll get to see the Golden Gate Bridge, Alcatraz, downtown San Francisco, and Treasure Island. You’ll make the turnaround on Yerba Buena Island, and then get to see it all again in reverse, along with the rolling hills of Oakland on the return route back. 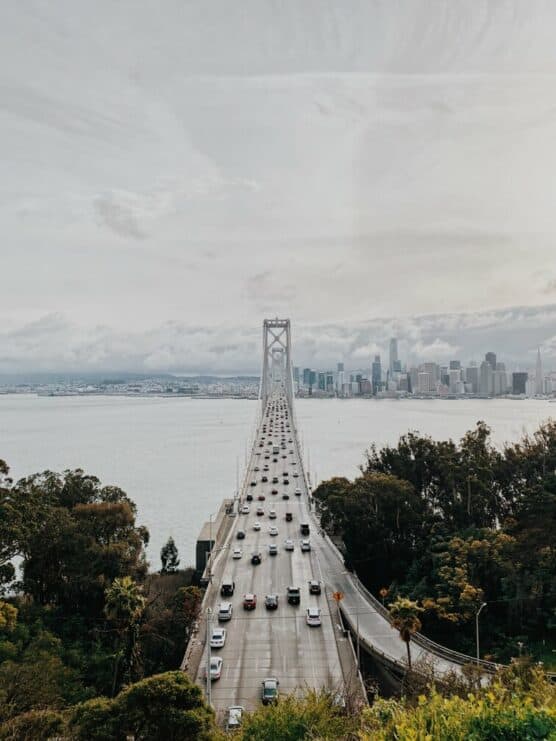 Photo by adrianna geo on Unsplash

Nestled along the shoreline of San Francisco Bay, just across the Bay Bridge from its counterpart city, Oakland typically sees dry, mild weather in the early spring, when temperatures average between the mid-50s and the upper 60s, while rainfall amounts are typically low.

See the race route map for the Bay Bridge Half Marathon here.

To reserve your spot in the 2023 running of Oakland’s Bay Bridge Half Marathon, register online at RunSignUp.com here.

Ever run in the Bay Bridge Half Marathon? Share your impressions here, especially anything you learned about the course or the terrain that you think other runners might want to know.