With its nice, gentle, fast and flat course around the local park known as One Mile Recreation Area in Lower Bidwell Park, the Bidwell Classic Half Marathon celebrates its annual running this year, with hundreds of runners, walkers and relay participants expected to cross the finish line in both the 13.1-mile race and the 5K combined.

Thanks to its location inside the park, the race takes runners along a course made up entirely of paved surfaces along the park trails, with plenty of shade from the trees surrounding the paths.

In addition to the individual half marathon and 5K races, there will also be a half marathon relay for two-person teams, and the 5K is open to both runners and walkers.

The race starts and finishes on South Park Drive near the intersection of 5th Street and Woodland Avenue, and takes runners on a loop course that the field runs twice around the section of the park known as Lower Bidwell Park, which lies below Manzanita Avenue.

The steep and rocky terrain of the Upper Park, much of which lies in the foothill slopes of California’s Sierra Nevada Mountains, is much different from the terrain of the Lower Park, which is flat and level and is populated by thick forests of trees as well as streams and hiking trails.

Those running in the half marathon are sent off from the starting line in two waves — those running and walking in the 5K race begin their race ten minutes earlier. The Bidwell Classic race is one of two races that take place in the park each year, the other being October’s Hooker Oak Trail Half Marathon. 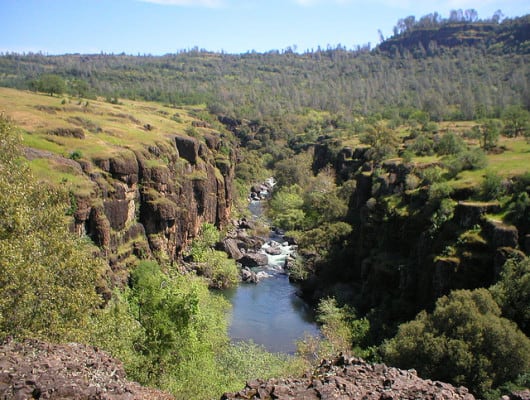 The creek that runs through Bidwell Park in Chico, California. (Photo by Derek Curry/flickr)

Located about a two-hour drive north from Sacramento in Northern California’s inland valley region, Chico typically experiences cool to mild conditions with plenty of wet weather in March, which has brought record temperatures here as low as 23ºF (in 1971) and as high as 93ºF (in 1914).

See the race route map for the Bidwell Classic Half Marathon here.

To reserve your spot in the 2022 running of Chico’s Bidwell Classic Half Marathon, Relay or 5K race, register online at RunSignUp.com here.

Ever run in the Bidwell Classic Half Marathon? Share your impressions here, or post your review in the Comments area below.