Runners in the Bizz Johnson Trail Marathon, Half Marathons, 50K & 10K get one of those rare treats seldom found at any race event, whether road race or trail race — a course that’s nearly all downhill, which has helped it become known as the “fastest marathon in the West,” according to race organizers.

Sunday’s half starts at the midway point of the full marathon course (which took place the preceding day), and runs through California’s Lassen National Forest all the way to the finish line in nearby Susanville, with really only one significant hill during the entire race.

Organizers also emphasize that this race is considered one of the state’s best opportunities for runners looking to set personal record times, because while the race is all downhill and runners descend about 1,100 feet overall throughout the race, the angle of descent is never steeper than about 2%, so the course offers a mild, easy downhill run throughout.

Gorgeous mountain scenery. After the first few miles of the Saturday half, runners enter the area known as the Susan River Canyon, where runners will cross the river no fewer than 10 times over wooden bridges that overlook the river flowing far below. All around there is beautiful natural scenery, from the high cliffs of the surrounding mountains to the trees making their seasonal turn to many different shades of yellow, orange and brown.

Runners hit a quick downhill and uphill just before the 7-mile marker in the half marathon (and the 20-mile marker in the full marathon), where the course falls and quickly rises a little over 100 feet in elevation, but after that the course resumes its steady, mild descent toward the finish.

As they near the finish, after trekking through a combination of wooded forest areas, open meadows and alongside the river, runners get to run through two old railroad tunnels in the final few miles of the race. To make sure they’re well lit inside, organizers place miners’ lights throughout both tunnels.

Saturday’s half follows a different route. On Saturday, the race offers the Bizz Johnson Trail Half Marathon, which follows a point-to-point route that starts at the Railroad Depot in Susanville, near the intersection of Richmond Road and Railroad Avenue.

The Saturday half covers the last quarter of the full marathon route instead of starting at its half-way point. Because it follows an out-and-back course, Saturday’s half marathon is uphill for the first half of the race, and downhill over the second 6.5 miles.

Runners finish this race too at the Hobo Camp just off the trail, near Hobo Camp Road before you’re about to enter Susanville. 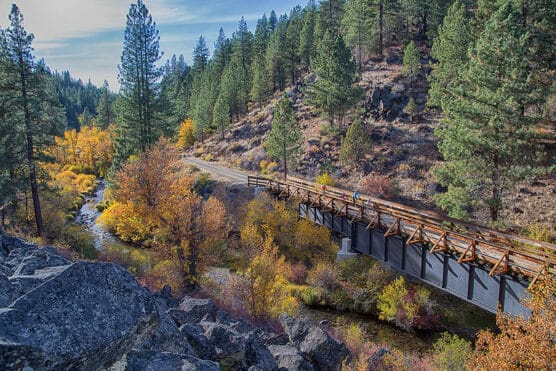 Located near the northernmost tip of the state in Northern California, about 165 miles northwest of Sacramento, Susanville typically sees mild weather in October, with cool mornings and warm weather mid-day. Precipitation is almost nonexistent through the month.

To reserve your spot in the 2023 running of Susanville’s Bizz Johnson Trail Marathon, 10K, 50K or either of the half marathon races, register online at RunSignUp.com here.

Ever run in either of the Bizz Johnson Half Marathons? Share your impressions here, or post your review in the Comments below.