The views of the coastline at the Carlsbad Marathon & Half Marathon are a welcome sight for any runner who’s not from the local area, as this wintertime road race offers a respite from the cold winter conditions in much of the rest of the country this time of the year.

One of three half-marathon events that make up Southern California’s Half Marathon Triple Crown (including April’s La Jolla Half Marathon and the America’s Finest City Half Marathon in August), the Carlsbad races provide a course whose signature is its sun and surf, with waves crashing alongside the shore for runners for much of the race course.

Featuring an out-and-back course that starts and finishes at the Plaza Camino Real shopping center between Carlsbad and Oceanside, the race is considered both the fastest of its kind in the San Diego area and one of the fastest half marathon running events anywhere in the country.

The race’s first couple of miles take runners through Carlsbad’s city streets, on the way to Highway 101 (Carlsbad Boulevard), which begins the long straightaway that takes runners along the Pacific shoreline.

There are no major hills along the course, just gently rolling hills and an elevation change that never rises above about 75 feet above sea level. The stretch along Highway 101 takes runners all the way down to the intersection with Breakwater Road, where runners then hit the turnaround point and begin heading back up the course toward the finish line.

Just over 7,500 runners, walkers and wheelchair competitors crossed the finish line in both races combined in 2016, including more than 5,800 finishers in the half marathon alone. 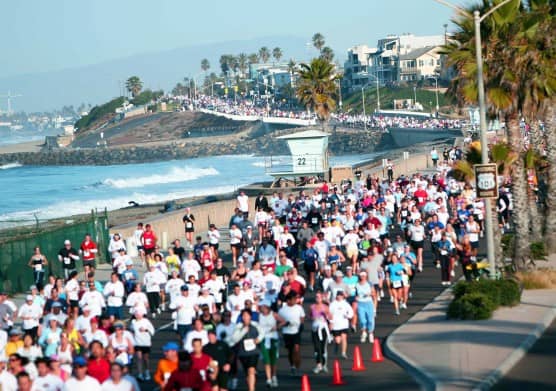 Runners take to the streets at the Carlsbad Marathon & Half Marathon. (Photo courtesy In Motion Events)

Located between the San Diego metropolitan area to the south and Camp Pendleton Marine Base to the north, the city of Carlsbad generally enjoys the same kind of weather that neighboring San Diego sees — year-round mild temperatures and relatively little precipitation.

In January, the city’s average monthly temperatures range between 49°F and 65°F, while rainfall amounts average just under 2 inches for the month. On the day of the race (Jan. 16), the average low is 49°F and the average high is 65°F.

To reserve your spot in the winter 2022 running of the Tri-City Medical Center Carlsbad Marathon or Half Marathon race, register online at Events.com by clicking here.

Ever run in the Carlsbad Half Marathon? Share your impressions here, or post your review in the Comments box below.