Ready for a race that takes you up and down some monster hills along the single-track trails that wind through this gorgeous park overlooking San Pablo Bay, roughly a half-hour’s drive from San Francisco?

That’s what awaits at the China Camp Challenge Half Marathon, which is part of a series of races known as the “Leader of the Pack” series, organized by Urban Coyote Racing in Northern California.

Run through China Camp State Park. The 1,514-acre park that you’ll run through offers beautifully scenic views of the waters of San Pablo Bay, with its tidal marshes along the shoreline that look up onto hills and mountains filled with wide-open meadows and forests, and plentiful hiking and mountain biking trails.

The land that the park sits on has a history that dates back to before the 1700s, when the indigenous coastal Miwok people lived here, hunting its woods and fishing along the bay. But after the Spanish arrived in the late 1700s and settled the area, the Miwok were largely wiped out decades later.

Big hills early in the race. They’re what gives the Miwok Meadows Campground its name, and that’s where runners will start the race. From there, the course follows a counter-clockwise loop route through the park, including some big, big hills in the race’s first half.

You’ll climb nearly 1,000 feet between the race start and the mile 5 marker along the park’s southwestern edge, along Bayhills Drive. After that, you’ll follow a long, steady downhill for the next few miles, and then it’s roughly flat for the last couple of miles back in to the finish line at Miwok Meadows.

Here’s how the race organizers describe the park:

“Lots of single track trails to enjoy as well as views of the great landmarks of the Bay Area.  We always like coming back to China Camp for its natural canopy of trees which protects you rain or shine, the diverse tidal marshes and the wild turkeys everywhere!” 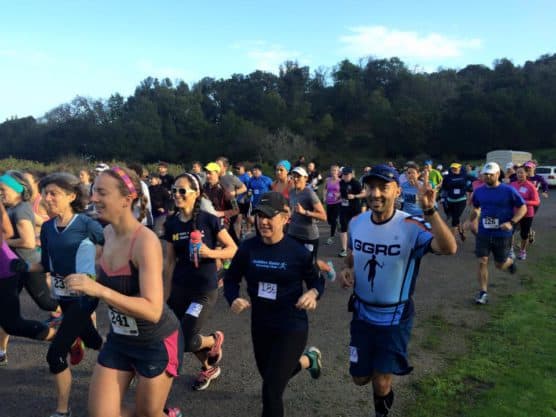 Runners take off from the starting line at the 2017 China Camp Challenge. (Courtesy Urban Coyote Racing)

Nestled along the shoreline of San Pablo Bay in Northern California, just miles from San Rafael, the park is closest to Santa Venetia, which typically sees some of its chilliest and wettest weather of the year in January, when precipitation amounts average just over 9 inches for the month.

See the race route map for the China Camp Challenge Half Marathon here.

To reserve your spot in the 2023 running of San Rafael’s China Camp Challenge Half Marathon, 10K or 5K race, register online at RaceRoster.com here.

Ever run in the China Camp Challenge Half Marathon? Share your impressions here, as well as anything you learned about the race that you think other runners/walkers should know.