Every runner who crosses the Fairy Finish line will earn their “wings” with a Tinker Bell-themed race finisher medal.

The race organizers at Disney add that it’s a race especially for “fairies and princesses,” so expect plenty of runners to come out for the race dressed out as their favorite Disney princess character. More than 13,000 runners crossed the finish line in the half marathon in 2014, with another 8,300 finishing the Tinker Bell 10K.

Runners start the race on Disneyland Drive along the western edge of the park, near the Paradise Pier Hotel and the section of the park known as “Downtown Disney.”

Here’s where the race really gets going, of course, as runners turn off the main road and head into the Disneyland park itself. The route takes runners past a string of the park’s most well-known and beloved attractions, from Toon Town, Fantasyland and the Matterhorn to Space Mountain, Sleeping Beauty’s Castle and a run down Main Street U.S.A.

The race will also take runners right past Tinker Bell’s own Pixie Hollow, past Tom Sawyer’s Island and Frontierland, and then run west through the shops and restaurants of Downtown Disney on the way back out of the park and onto Magic Way and Walnut Street.

The next stretch of the race — which lasts for about the next seven miles — takes runners out of the Disneyland resort and onto the streets of Anaheim. Runners will follow Walnut Street north to Ball Road, where they’ll turn right and head east to Disneyland Drive once again and turn left.

That will take runners north all the way to West Broadway, where they’ll turn right and head east toward Anaheim’s City Hall. Next, they’ll make their way back down Harbor Boulevard toward Disneyland, making a loop around Anaheim Boulevard, Lewis Way and Disney Drive before heading back into the park a second time. 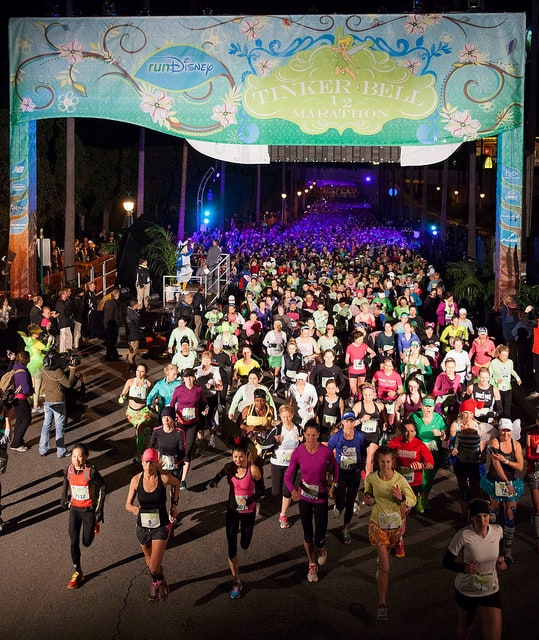 The start of the 2013 Disney Tinker Bell Half Marathon. (Photo by AngryJulieMonday/flickr)

Located in Southern California, just over 25 miles southeast of downtown Los Angeles, Anaheim typically sees mild to moderately warm and typically very dry weather in May, a month when temperatures here have been recorded as low as 45 degrees (in 1999) and as high as 106 degrees (in 2004).

Ever run in the Disney Tinker Bell Half Marathon? Share your impressions here, or post your review in the Comments box below.

See more races in May, California