Recognized as “the world’s fastest half marathon course” by USA Track & Field back in 1985, the Fontana Days Run Half Marathon also includes a four-person team relay for the half marathon, a 5K Run/Race Walk, a Family Fitness Walk and a Children’s half-mile dash, and celebrates its 67th annual running in 2023.

One of California’s (and the country’s) oldest road races — its first running saw 200 runners cross the finish line back in 1955 — the race today brings out about 2,000 runners each year for this fast downhill course that starts at the Applewhite Campground in Lytle Creek just north of the city and finishes at Fontana’s City Hall.

From the starting line at Applewhite Campground, the race starts runners on the first six miles of the course, which feature all paved terrain that’s also a steep downhill run through the Lytle Creek community, which runs through the San Bernadino National Forest.

After making their way along South Lytle Creek Road for much of the first half of the race, runners then transition onto Sierra Road for the last seven miles of the race, changing from a steep downhill to a moderate to mostly gradual downhill run for the remainder of the race, all the way to the finish at City Hall at 8353 Sierra Avenue.

Organizers note that because the shuttle bus ride to the starting line can take as long as 45 minutes, runners are strongly encouraged to be at City Hall and ready to board the bus to the start by 5:00 AM. 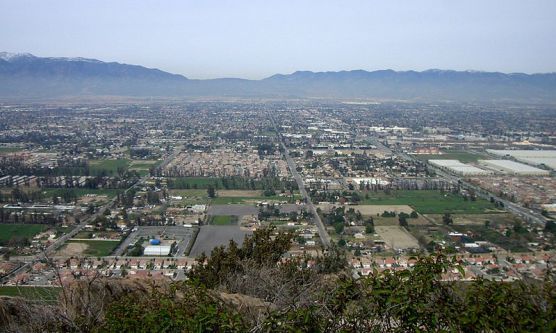 A view of Fontana, California, as seen from nearby Mount Jurupa. (Photo by Wikimedia)

Located about 55 miles east of nearby Los Angeles, the city of Fontana tends to experience moderately dry, warm weather conditions in the early weeks summer, with almost no precipitation to speak of. In June, record temperatures here have hit a low of 42 degrees (in 1962) and a high of 111 degrees (in 1961).

See the race route map for the Fontana Days Run Half Marathon here.

To reserve your spot in the 2023 running of the Fontana Days Run Half Marathon or 5K race, register online at RaceWire.com here.

Ever run in the Fontana Days Run Half Marathon? Share your impressions here, or post your review in the Comments below.