More than 3,700 runners came out and trekked across the bridge in the race last year, along a mostly fast and flat course — though there are some challenging, hilly stretches around the mid-point of the course, when runners tackle the hills leading up to and coming down from the bridge.

The 13.1-mile course for the race begins at the historic Muni Pier on the city’s waterfront area, near the Aquatic Park on Van Ness Avenue.

From there, the out-and-back course takes runners on a mostly westward route through the city streets, along Bay Street, Marina Boulevard and Mason Street on the way toward Lincoln Boulevard and the approaching roadway to the bridge.

Once on the bridge, runners follow the course all the way over to the other side at the Marin Headlands, and reach the turnaround point at North Vista Point, where they start the second half of the race.

The course follows through here, and then along Marina Boulevard, all the way to the finish line back at the Aquatic Park near the pier. Participants will need to keep at most a 16-minute-per-mile pace, and the course will remain open for 3.5 hours. 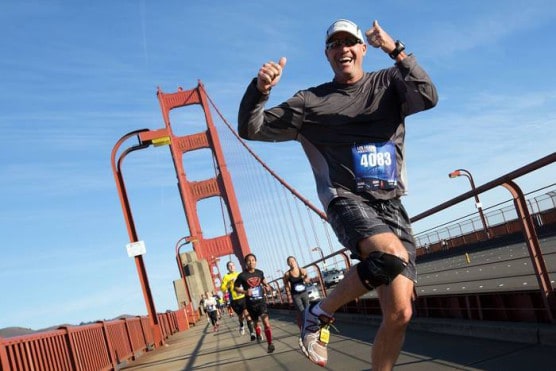 The weather in the “city by the bay” can be unpredictable throughout the year, and is famous for its cool-to-cold summer weather, though fall brings moderate temperatures with occasional showers. In November, record temperatures here have reached as low as 40°F (in 1994) and as high as 86°F (in 1966).

See the race route map for the Golden Gate Half Marathon here.

To reserve your spot in the 2023 running of San Francisco’s SoFi Golden Gate Half Marathon or 5K race, register online at Active.com here.

Ever run in the Golden Gate Half? Share your impressions here, or post your review in the Comments below.