Mountains, beaches and a challenging hilly trail run through a vast, unspoiled wilderness that sits right across the bay from one of the country’s densest urban areas — that’s what awaits runners who make the trek across the Golden Gate Bridge to tackle the mid-winter running of the Golden Gate Trail Half Marathon, part of an event that also features a full marathon, 50K, 30K and the 5-mile distance.

As noted above, the Golden Gate Trail Run is actually run twice during the year — in the late winter on Saturday, Feb. 5, and in the heat of summer in July. Both races use the same courses for all race distances.

Organized by Coastal Trail Runs — a Walnut Creek, Calif.-based race event management company which hosts nearly 30 marathon, half marathon and other distance races up and down the coasts of Oregon and California throughout the year — the race takes runners in the half marathon on an out-and-back loop route that starts at Rodeo Beach in the Marin Headlands in the Golden Gate National Recreation Area, which spans some 60 miles along the Northern California shoreline near San Francisco.

The half marathon course takes runners from the starting line at Rodeo Beach almost immediately into the hills just north of the beach, starting runners off with a climb of more than 800 feet over the course of the first two miles. Runners follow trails that wind through the hills and mountains of the Marin Headlands, which feature names like the Coastal, Wolf Ridge, Miwock, Old Springs and Marincello trails, among others.

Runners make what is basically a clockwise loop through the park, bringing them around along the ridgeline that looks over the Redwood Highway into nearby Sausalito, and then south back in the direction of Conzelman Road, the famed roadway that winds along the coastline and looks out onto Point Diablo and Bonita Cove.

The views through the entire route will truly be spectacular if the weather cooperates — though San Francisco and the Bay Area can of course be known to experience rain in the winter.

The final few miles of the race route bring runners off the trails and onto Conzelman Road for a brief stretch, including a pass by the historic Nike Missile Site, which once stood guard during the Cold War as one of the nation’s last lines of defense should Soviet bombers make a strike against the U.S. coast. The course then winds back around the Rodeo Lagoon for the race finish right where runners started back at the beach. 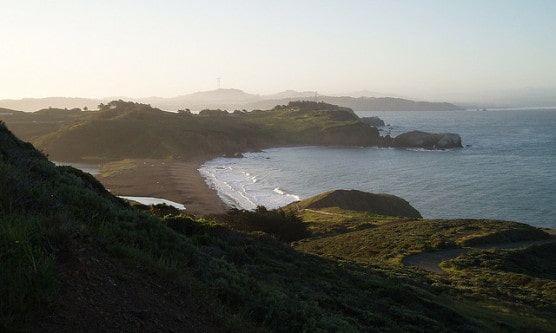 View from the Coastal Trail in the Golden Gate National Recreation Area. (Photo by Tom Hilton/flickr)

Draped along the Marin Headlands near Sausalito, across the Golden Gate Bridge from San Francisco, the Golden Gate National Recreation Area typically sees mild to cool weather even in the middle of the summer.

See the race route map for the Golden Gate Trail Half Marathon here.

Ever run in the Golden Gate Trail Run Half Marathon? Share your impressions here, or post your review in the Comments box below.