You’ll get to take in sweeping views of the Pacific coastline along the Half Moon Bay Coastal Trail at the all-new Half in Half Moon Bay, which makes its inaugural running through this gorgeous oceanfront city in the late summer, along a combination of paved, dirt and gravel surfaces on what was a railroad nearly a century ago.

From there, the race first heads north along the trail before turning left on Venice Boulevard, which brings you out toward Half Moon Bay State beach, where you’ll get youi first glimpse of the waves and the shoreline. After that, the race keeps heading north along the trail, all the way through Roosevelt Beach and Miramar Beach to Pillar Point Harbor Beach.

Once you reach the turnaround there — a harbor where you may see fishermen selling the crabs and fish they’ve caught right from their boats, by the way — you’ll head back south along the trail, following it all the way back to Venice Boulevard again.

World-famous views. You’ll keep heading south through Half Moon Bay State Beach, along the 9 1/2-mile-long trail that was once the Ocean Shore Railroad all the way back in the 1920s, before the rise of automobile travel made it obsolete.

The railroad went out of business after 14 years and was converted to a paved trail for running, walking and biking many years later, and today it snakes along the edge of tall bluffs as well as through giant cypress trees, with views of the waves crashing along the shoreline in places like the Mavericks, known for its sometimes 80-ft.-high waves.

The half marathon keeps heading south through the park all the way to the Wave Crest Open Space, where you’ll hit the southern turnaround point next to Smith Field little league ballpark.

After that, you’ll head back north again along the Coastal Trail, all the way back to Farmer John’s Pumpkin Farm for the race finish. 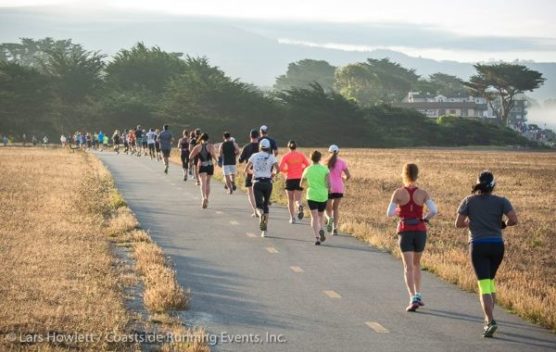 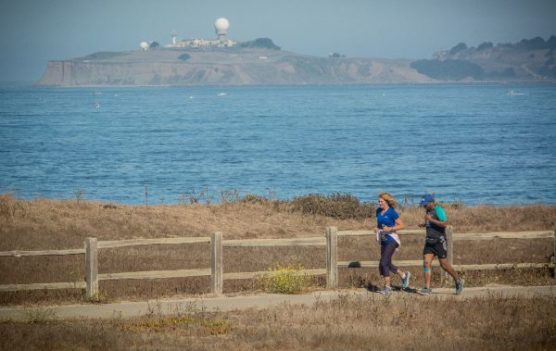 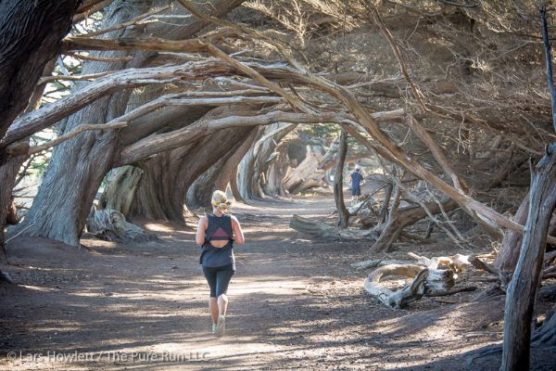 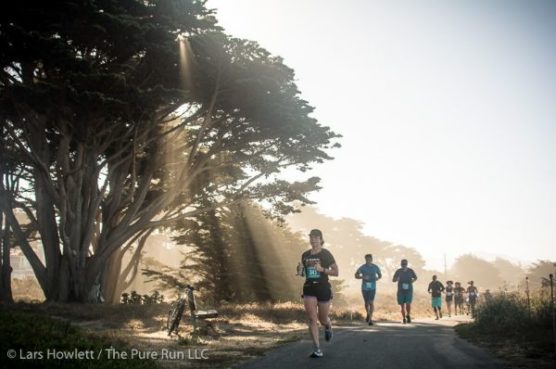 All photos courtesy The Pure Run/Half in Half Moon Bay

Nestled along the Northern California coastline, about 30 miles south of San Francisco, Half Moon Bay typically sees mild weather throughout most of the year, with August bringing temperatures that range between the low 50s and the mid-60s and some of its driest weather of the year, with just over a quarter of an inch of rain on average.

See the race route map for the Half in Half Moon Bay Half Marathon here.

To reserve your spot in the 2018 running of the Half in Half Moon Bay or 10K race, register online at SweatTracker.com here.

Ever run in the Half in Half Moon Bay Half Marathon? Share your impressions here, as well as anything you learned about the race that you think other runners/walkers should know.