The Half Marathon at Pebble Beach

Cypress trees, ocean breezes and the kelp beds swaying with the waves atop the blue waters of the Pacific Ocean — all that awaits and more at the Half Marathon at Pebble Beach, which promises a route that will be run entirely within the world-famous resort, along its legendary 17-Mile Drive.

Runners at this race get to enjoy a course that will unfold largely along the hills of 17-Mile Drive, an “enchanting world full of dramatic coastal cliffs, snow-white beaches, mystical forests and iconic golf courses,” according to the resort’s official website.

You’ll start the out-and-back course for the race along the beach in front of Spanish Bay, and from there join up with 17-Mile Drive, which you’ll remain on for the next 5 1/2 miles.

This stretch features plenty of rolling hills but sticks mostly just above sea level, with the exception of some bigger hills around the half-way point of the race. Once you hit the half-way turnaround point on Drake Road in Pebble Beach, you’ll run the exact same route in reverse all the way back to Spanish Bay for the race finish.

“If you have the means, I highly recommend it,” goes the famous line by Ferris Bueller from the classic 1986 movie, and that’s definitely worth keeping in mind for this race. That’s because you can register for more than just the race.

You also may stay at the resort’s Inn at Spanish Bay for one or two nights, which start at $999 or $1,479, depending on the length of your visit.

With that said, this is definitely a once-in-a-lifetime kind of race event, as you’ll run along some of the most hallowed ground in the world, especially if you’re a golf fan — Pebble Beach is the place where Tiger Woods blew away the field by 15 strokes to win the U.S. Open back in 2000, and where Bill Murray and others make the annual AT&T Pebble Beach Pro-am a must-see event each spring. 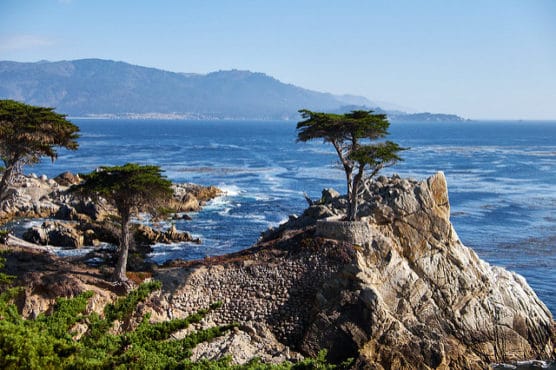 Nestled along the coast of Northern California near Monterey, roughly a 2-hour drive south from San Francisco, Pebble Beach sees its coolest and wettest weather in the winter months, as January brings an average of more than 4 inches of rainfall and temperatures that rarely rise above 60 degrees.

See the race route map for the Half Marathon at Pebble Beach here.

To reserve your spot in the 2019 running of the Half Marathon at Pebble Beach or the 10K or 5K race, register online at the event website below.

Ever run in the Pebble Beach Half Marathon? Share your impressions here, as well as anything you learned about the race that you think other runners/walkers should know.