It’s often called one of the most romantic and breathtaking places anywhere on the west coast, and when you get a look at the landscape here, it’s not hard to see why.


Pacific Ocean waves crashing along the sandy beaches, wildflowers blooming in the lush grasslands along the bluffs that look out onto the water, and biking trails that connect the beach towns along this stretch of coastline, surrounded to the east by mountains and forests.

That’s the kind of scenery that awaits runners at the annual Half Moon Bay International Marathon in the first few days of fall — which the race organizers have dubbed “26.2 miles of running heaven” — and will offer a full marathon in addition to a 13.1-mile half marathon.

Much of the course takes runners along the Half Moon Bay Coastal Trail, a roughly 6-mile-long paved trail for runners, walkers and cyclists that stretches from Pillar Point Harbor — the surfing mecca where the famed Big Wave Surfing Contest is held each year, which also serves as the starting and finish line for the race — nearly all the way to the Half Moon Bay Golf Links.

Thanks to its location along the shoreline, most of the trail is flat and fast, with only the occasional rolling hill.

From the starting line, runners in the half marathon follow what is essentially an out-and-back run south from Pillar Point Harbor along the coast, passing by El Granada and Miramar on the way down to the southernmost point of the half marathon route, the turnaround point on Central Avenue, just north of Poplar Beach.

Once runners hit the turnaround, they then start heading north along the same course they’ve just run in reverse, all the way back to Pillar Point Harbor for the race finish.

With the exception of a brief stretch that brings runners parallel to the Cabrillo Highway early in the race (and near the end, on the return route back to the finish), the course keeps runners off the highways and streets away from auto traffic, and solely on the pedestrian and bike trails along the coast. 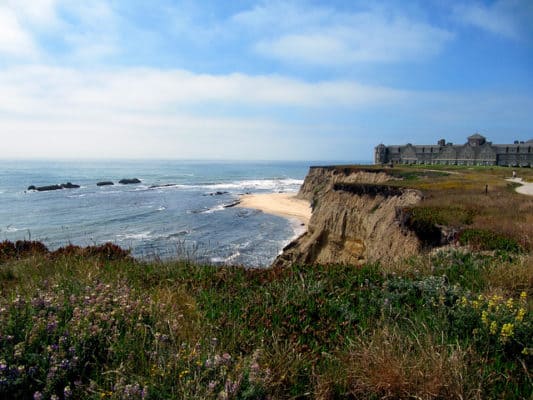 The stunning views of the coast of Half Moon Bay, Calif. (Photo by Rachel Kramer/flickr)

Nestled along the coastline of San Mateo County in Northern California, about 25 miles south of downtown San Francisco, Half Moon Bay typically sees September temperatures that average between 52°F and 67°F, while rainfall is scarce in the summer and early fall, averaging just over a third of an inch for the month.

See the race route map for the Half Moon Bay International Half Marathon here.

To reserve your spot in the 2016 running of the Half Moon Bay International Marathon or Half Marathon, visit the event website below.

Ever run in the Half Moon Bay International Half Marathon? Share your impressions here, or post your review in the Comments below.