Set for its 6th annual running this year through the stunningly scenic hills and canyons of the Sierra National Forest that look down onto the small town of Auberry, Calif., the Heavenly Half Marathon unfolds along a point-to-point route that’s almost all downhill for the entire race.


Begin at 4,600 feet. You’ll follow a nearly all-downhill point-to-point route for the race, which starts at Cressman’s General Store in Pine Ridge, a tiny community along Tollhouse Road, and located roughly five miles from Shaver Lake to the northeast.

From there, runners will head west along Tollhouse Road and then turn onto Auberry Road, which they’ll follow for nearly the entire rest of the race, with mountains in the distance and the roadways shaded by pine trees for much of the run.

The course (very) gradually descends from an elevation of just over 4,600 feet above sea level at the starting line to about 1,990 feet by the time you reach the finish line in Auberry, at Auberry Elementary School.

“Fast” and “incredibly scenic.” The race is part of a three-race series known as the Soul Half Marathon series, which run through some of California’s most gorgeous landscapes, and also includes the Judgement Day Half Marathon and August’s Hell of a Half Marathon in Exeter, Calif.

Finishers receive a sweatshirt and a custom trucker hat, for all runners who register by the organizers’ deadline — see the official race website for details. 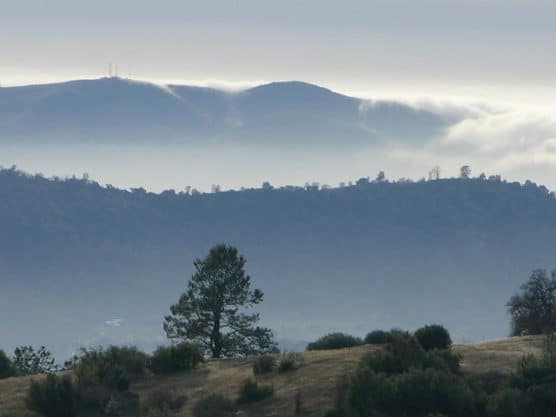 The view from the top of Auberry Road in Fresno County, Calif. (Photo by David Prasad/Flickr)

Nestled along the edge of the Sierra National Forest in Fresno County, roughly a three-hour drive from San Jose, Auberry typically sees mild mornings, warm afternoons, and some of its driest weather of the year in December, which averages between the  low 40s and the low 70s.

See the race route map for the Heavenly Half Marathon here.

To reserve your spot in the 2022 running of Auberry’s Heavenly Half Marathon, register online at RunSignUp.com here.

Ever run in the Heavenly Half Marathon? Share your impressions here, as well as anything you learned about the race that you think other runners/walkers should know.