Set for its 3rd annual running this fall under the sunny skies of Southern California, the Kaiser Permanente Thrive Half Marathon is set to unfold along the streets of San Diego, starting at the new Kaiser Permanente San Diego Medical Center in Kearny Mesa, and finishing in Mission Bay after a run past Sea World.


The race begins, as mentioned above, at the new Kaiser Permanente Medical Center on Ruffin Road, near the intersection with Balboa Road. From there, the course heads south along Ruffin to Murphy Canyon Road, where you’ll begin a stretch that will take you south around Qualcomm Stadium, the former home of baseball’s San Diego Padres and today the home of San Diego State’s Aztecs football team.

The biggest hills of the race occur just past the 2nd mile marker, a downhill stretch along Murphy Canyon Road. Once you make the turn around the southern end of the stadium, the course is largely flat and fast from then all the way in to the finish line, along mostly long straightaway stretches, especially in the race’s second half.

Runners turn left on Friars Road and will keep heading west until they reach Sea World San Diego and Mission Bay, running past the aquatic park on their way across the Ingraham Street bridge, over onto Vacation Isle, where they’ll run the beach path towards Sail Bay, and cross the finish line in Vacation Isle Park.

Organizers note that the race is designed to promote healthy living and an active lifestyle, and proceeds from the event will go to benefit Make-a-Wish San Diego.

The race also is “the perfect beginners’ run,” they add, thanks to its flat and fast route — it could also be a great race to record a personal record time, for runners interested in achieving their first or a new PR time. 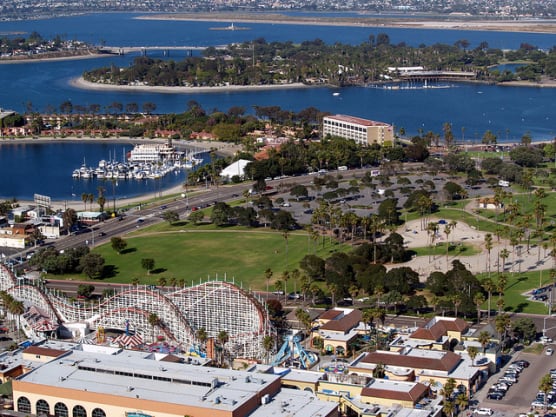 Known for its mild, dry and sunny Mediterranean-like climate throughout most of the year, San Diego sees very little rainfall throughout the summer and fall months, and temperatures during November average between the low 50s and the mid-70s.

See the race route map for the Kaiser Permanente Thrive Half Marathon here.

To reserve your spot in the fall 2019 running of San Diego’s Kaiser Permanente Thrive Half Marathon race, register online at EventBrite.com here.

Ever run in the Thrive Half Marathon? Share your impressions here, as well as anything you learned about the race that you think other runners/walkers should know.