Set for its late winter/early spring annual running in 2023, the Livermore Valley Half Marathon follows a largely fast and flat route for most of its loop route here in one of California’s oldest wine regions.

What you’ll see. Named for Robert Livermore, a rancher who planted the area’s first commercial vines back in the 1840s, the city sits in the heart of the Livermore Valley and today is home to more than 50 wineries, most notably the famed Wente and Concannon wineries.

Thanks to the ranches that have been working here since the 1800s, Livermore also is home to reportedly the “World’s Fastest Rodeo,” an event that dates back more than a century and gets its claim to fame from having more riders per hour than any other rodeo like it in the world. (So its organizer say!)

(As impossible as this sounds, Livermore also is home to the “world’s longest lasting light bulb,” the Centennial Light, a hand-blown bulb with a carbon filament that has burned in the main station of the Livermore-Pleasanton Fire Department for more than 110 years.)

What the course is like. You’ll get to take in all of the area’s natural beauty along the course, which starts in the city center at the intersection of First Street and Livermore Avenue. From there, the race heads south and onto a counter-clockwise loop, along Arroyo Road, Concannon Boulevard and Wetmore Road, before heading onto the trails that wind through Sycamore Grove Park.

Most of the race features only gently rolling terrain, in fact the first 8 miles feature little elevation change at all. The only hilly stretch of the race occurs just as you’re about to enter Holdener Park around mile 9, as the course rises about 150 feet in elevation through the park.

After that brief hilly stretch through the park, the course heads downhill and flattens out again, and there’s a long, gentle descent over the last couple of miles along Wente Street, Colcannon and a stretch along the Arroyo Bike Trail, before runners head into the finish line back in downtown Livermore.

Enjoy the local wines at the finish. Once you cross the finish line, you’ll get to enjoy a glass of wine (or beer) from one of 13 area wineries and breweries. 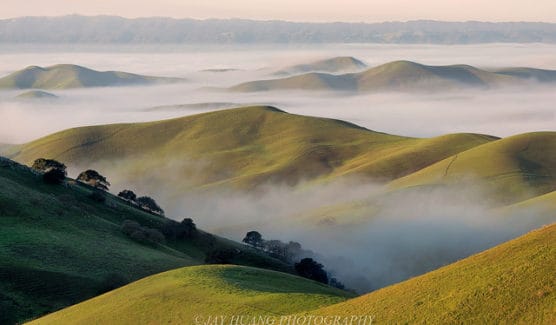 The rolling hills of Livermore, Calif. (Photo by Jay Huang/flickr)

Located in the southern San Francisco Bay area, about an hour’s drive each from downtown San Francisco and San Jose, Livermore typically sees some of its mildest and wettest weather of the year in March, when temperatures average between 42ºF and 65ºF, and rainfall totals average just under 2.5 inches, making March the city’s third-wettest month of the year.

See the race route map for the Livermore Half Marathon here.

Local hotels including the Courtyard Marriott, Holiday Inn Express & Suites and the Hilton Garden Inn Livermore are recommended by the race organizers.

To reserve your spot in the 2023 running of the Livermore Valley Half Marathon race, register online at RunSignUp.com here.

Ever run in the Livermore Valley Half Marathon? Share your impressions here, or post your review in the Comments below.