Now a holiday tradition here in a Southern California city that some say holds “the secrets of longevity,” thanks to the fact that so many of its residents live well into their 80s and 90s, Loma Linda’s Lopers Club Holiday Classic features a 13.1-mile race and a 5K event for runners as well as an “Elves trot” for children ages 3 through 6.


The race is set for its 30th annual running this year, and is organized by the Lopers Club for runners and walkers, which got its start here in the Inland Empire area back in the late 1970s and has been going strong ever since, club organizers say. Today, they meet for weekly running clinics and participate in races throughout the region.

The group’s Holiday Classic Half Marathon follows an out-and-back course that starts and finishes on Loma Linda Drive, next to the Loma Linda Civic Center.

From there, the course heads west and south, and then east as it winds its way along Huron Street, Beaumont Avenue, George Street and Newport Avenue, all the way to Barton Road. After that, the course turns onto the bike path along the San Timoteo Wash, where you’ll hit the turnaround point and take in views of the San Bernardino Mountains off in the distance.

Aside from a brief stretch in the final mile, you’ll experience the same route in reverse that you run in the first half of the race – alternating flat and uphill stretches, and then a stretch along the bike path. Then it’s the opposite run all the way back to the Loma Linda Civic Center for the race finish.

Organizers ask that all entrants arrive one hour before their starting time on race day – which means you’ll need to be at the start by 6:00 AM, especially if you’re planning on registering on the day of the race.

While you’re in town, soak up as much as you can of this special city, which has been profiled by the likes of the Today Show and the Los Angeles Times for its famously long-lived inhabitants. As a Times profile from 2015 notes about one of its typical residents: “At 100, Benita Welebir is chatty and observant. What’s extraordinary about her longevity is that it’s not. In Loma Linda, she’s just another active old person.”

That’s led to Loma Linda being named one of the planet’s five “Blue Zones,” places where people live extraordinarily long lives that were popularized by National Geographic magazine a few years back. 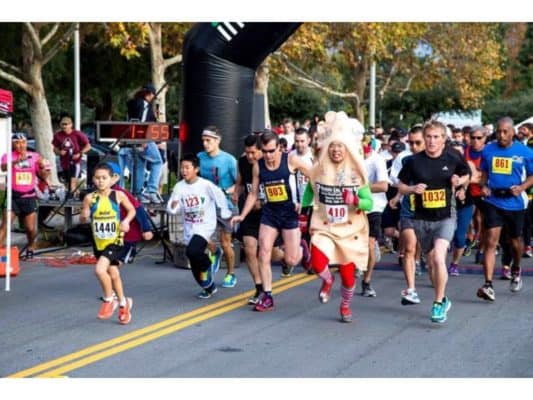 Located in Southern California, just south of San Bernardino and about 60 miles east of downtown Los Angeles, Loma Linda typically sees its coolest weather of the year in December and January, as average temperatures for December range between 40ºF and 66ºF and precipitation amounts average just over 1.5 inches.

To reserve your spot in the 2019 running of Loma Linda’s Lopers Club Holiday Classic Half Marathon or 5K race, register online at RunSignUp.com here.

Ever run in the Lopers Club Holiday Classic? Share your impressions here, or post your review in the Comments below