Set for its 12th annual running in 2023, after 2019’s race saw more than 2,000 runners cross the finish line in all three races combined, the Mermaid Series Half Marathon, 10K and 5K in San Diego is part of a five-race series that also features half marathons in Arizona and the San Francisco Bay Area.

The Mermaid San Diego Half Marathon featured all-new courses for last year’s running, routes that start and finish within a stone’s throw — the starting line, at least — of SeaWorld San Diego park, along the shoreline of Mission Bay just north of downtown San Diego. From there, runners will make their way along a largely fast and flat route around the bay, with a course that rarely varies between 10 and 20 feet above sea level.

Runners start the race on the western edge of the park near the Mission Bay boat launch and South Shores Park, and from there follow Mission Bay Parkway, Sea World Drive and Fiesta Island Road over onto Fiesta Island, a recreational island with mostly parks and beaches that overlooks the saltwater lagoon of Fiesta Bay and the Enchanted Cove.

After making the clockwise loop around Fiesta Island, runners head back across the bridge at Fiesta Island Road to East Mission Bay Drive, which they’ll take north through a series of parks along the bay’s shoreline, Tecolote Shores North Park, Playa Pacifica Park, Mission Bay Park and De Anza Cove Park. Once they make it to the bridge over Ross Inlet, they’ll then continue on as the road becomes Crown Point Drive to the first turnaround point.

Once they make the turn and head back in the opposite direction along Crown Point Drive and across Ross Ilnet, runners head back into De Anza Cove Park, for a long stretch south along the shoreline of Mission Bay to the finish line in Tecolote Shores North Park. Instead of the roadways, they’ll stick close the shoreline along the running and walking paths through Mission Bay Park and Playa Pacifica Park.

The finish line lies in Tecolote Shores North Park, just before runners reach the end of the land. There is no time limit for the race, and all runners will receive both an official race t-shirt and an official finisher necklace. 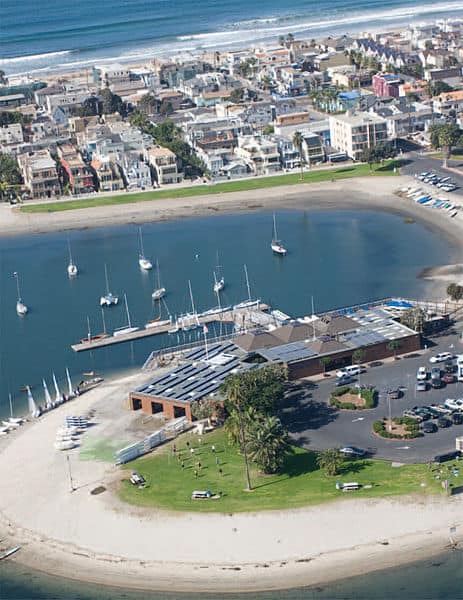 San Diego is famous for its year-round mild weather with temperatures that rarely vary from the 60- to 80-degree range, and usually very low rainfall totals. The area sees an average of 2.04 inches of rain in February.

See the race route map for the Mermaid Half Marathon San Diego here.

To reserve your spot in the late winter 2023 running of San Diego’s Mermaid Half Marathon, 10K or 5K race, register online at RaceRoster.com here.

Ever run in the Mermaid Half Marathon? Share your impressions here, or post your review in the Comments box below.