Part of a women-focused race series that got its start in 2006, the Mermaid Series Half Marathon is designed to inspire women from all backgrounds to uncover and realize their full potential, by providing support, training, motivation, and eco-friendly events while committing to the participants healthy lifestyle.

This popular park is a great spot for swimming, fishing, hiking, biking, and picnicking. The quarries for which the park is named were established in the mid-19th century when gravel from the nearby Alameda Creek was used in the construction the transcontinental railroad.

Eventually, the lakes began to be used by the Alameda County Water District for groundwater recharge. In 1997, the first phase of the park construction began and by 2000, recreational facilities were developed across its 471 acres.

Runners will start in the parking lot and head east to the Western Pacific trail near the swim area. The first aid station is located just before mile 2, and runners continue along the Western Pacific before exiting the park at Niles Gate, heading east along the Alameda Creek and reach a turnaround just past mile 3.

Just after mile 7 and before mile 9, racers will have chances to stay hydrated along the course, and will cross over Alvarado Boulevard and reach Ardenwood Boulevard where they reach the final turnaround.

Retracing their steps, racers will run back along the Alameda Creek trail and over the Sequoia Bridge once again. They will enter the park through the Sequoia Bridge Gate and make their way to the Ensenada Picnic area where they cross the finish line.

This flat course features no time limit and encourages women of all ages to join in the fun. Strollers are allowed, but encouraged to stay towards the back of the pack to allow faster runners keep from being blocked. 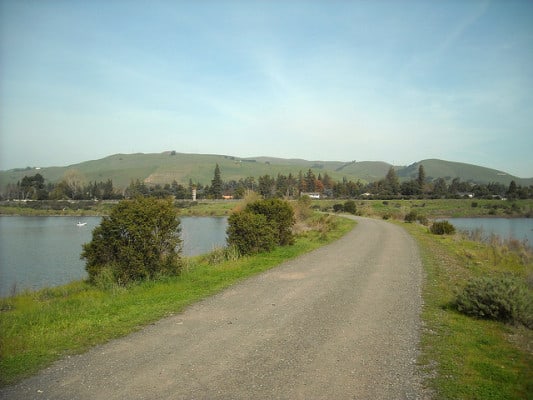 The trails along the lakeshore in Quarry Lakes Regional Recreation Area, California. (Photo by Daniel Ramirez/flickr)

Located in Northern California, in the part of the San Francisco Bay Area known as the Easy Bay and roughly an hour’s drive from downtown San Francisco, Fremont typically sees cool to moderately warm weather in May.

See the race route map for the Mermaid Run Half Marathon here.

To reserve your spot in any of the race distances at the spring 2023 running of Fremont’s Mermaid Run East Bay, register online at the official website here.

Ever run in the Mermaid Run East Bay? Share your impressions here, or post your review in the Comments below.