An estimated 20,000 women of all ages hit the streets of San Francisco each fall for the annual running of the Nike Women’s Half Marathon, which marks its 12th annual running in 2015 with a gorgeous, scenic and challenging race route.


At this race, you’ll get to see the famous hills of this city’s streets as well as the views of the Golden Gate Bridge and Golden Gate Park, Fisherman’s Wharf, Coit Tower, the signature TransAmerica building and more.

(Note: There won’t be a 2016 Nike Women’s Half Marathon in San Francisco. Read this post for more.)

The half marathon route starts at downtown San Francisco’s Union Square, near the intersection of Stockton and Post streets. From there, runners follow what is roughly an upside-down “U” shaped point-to-point course, most of which unfolds along the waters of the San Francisco Bay.

The race also features views of the bridge and the Marin Headlands off in the distance, Alcatraz and the Presidio as runners make their way around to the finish line looking out onto the Pacific Ocean, along Great Highway.

During the rest of the race, you’ll follow a course that winds through Crissy Field and along the neighborhoods that overlook South Bay from the cliffs above, as well as Lands’ End and the U.S.S. San Francisco Memorial.

The race’s hilliest stretches occur after the mid-way point of the race, as runners are passing around the edges of the Presidio and cross under the road that leads up to the Golden Gate Bridge.

Between the sixth and seventh mile markers, and again between the mile 8 and mile 9 markers, the race route sees some of its biggest hills, as the course rises roughly 300 feet in elevation in spots.

Those stretches are followed by big downhill descents between miles 9 and 10, and then by one much less steep hill between miles 11 and 12 along John F. Kennedy Drive, once runners have made their way into Golden Gate Park. The last mile of the race thankfully unfolds mostly downhill, to the finish line just outside the park. 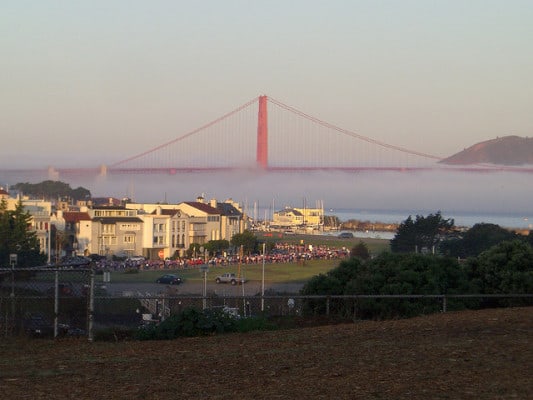 Runners in the distance at the Nike Women’s Marathon & Half San Francisco. (Photo by Burt/flickr)

San Francisco’s famously unpredictable weather turns generally mild to moderately cool in the early fall, usually with still quite dry conditions during the month the race is held (the city’s summers are usually very dry as well, while its winters are when most of its rainfall occurs).

In October, the city’s average monthly temperatures range between 69°F and 54°F, while rainfall totals average just over 1.1 inches for the month. On the day of the race, the average low is 54°F and the average high is 70°F.

To enter the random drawing for entry into the 2015 Nike Women’s Half Marathon San Francisco, sign up at the official race website here.

Ever run in the Nike Women’s Half San Francisco? Share your impressions here, or post your review in the Comments box below.