Nestled among the hills east of downtown Oakland and home to one of the Bay Area’s largest natural stands of coast redwood trees, which can grow to a height of nearly 400 feet, the Oakland Redwoods Half Marathon makes its debut this summer with a loop around Redwoods Regional Park.


This 1,830-acre park, which lies less than 20 minutes from the heart of the city, now is an unspoiled haven for the giant trees but was once a bustling logging area, supplying much of the wood that was needed for construction around the San Francisco Bay Area in the mid-1800s.

Today, it’s home to huge groves of trees that stretch as far south as Leona Canyon, and these evergreens can live as long as 1,800 years in this area thanks to its coastal climate, which provides cool, humid air year-round.

Runners will start the half marathon — as well as the 10K and 5K races — at the park’s Canyon Meadow Staging Area, which lies closest to the park’s Redwood Gate entrance, on its eastern side. From there, the half marathon route makes what is roughly a counter-clockwise loop around the park, along the East and West Ridge trails in the first few miles.

There are 40 miles of single-track trails that wind through the park, and you’ll run many of them during the race, including stretches past the Chabot Space and Science Center, which lies near the park’s western edge.

You can expect the toughest hills to come in the race’s first half, as you’ll experience an elevation climb of roughly 1,000 feet between the starting line and the 5th mile marker. The middle miles of the race unfold largely downhill, though there are still some steep uphills in the last few miles. 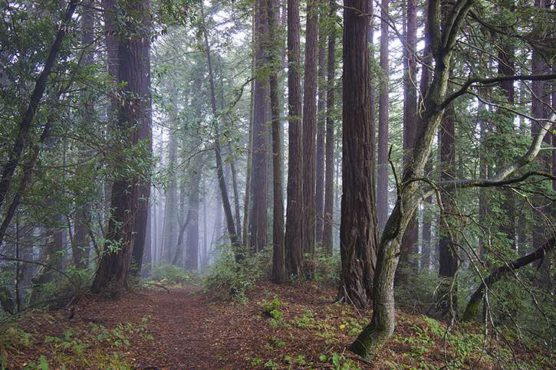 What it’s like on the trails inside Redwood Regional Park at the Oakland Redwoods Half Marathon, set for July 2018. (Courtesy Urban Coyote Racing)

Nestled along the East Bay coastline of the San Francisco Bay Area, just across the Bay Bridge from its counterpart, Oakland typically sees some of its warmest and driest weather of the year in July, when temperatures average between the upper 50s and the low 70s, and rainfall amounts average less than a tenth of an inch for the month.

See the race route map for the Oakland Redwoods Half Marathon here.

To reserve your spot in the summer 2022 running of the Oakland Redwoods Half Marathon, 10K or 5K race, register online at the event website here.

Ever run in the Oakland Redwoods Half Marathon? Share your impressions here, as well as anything you learned about the race that you think other runners/walkers should know.