Though running events have been commonplace in nearby San Francisco for years, Oakland hosted its first marathon in more than two decades with the inaugural running of the Oakland Running Festival in 2010, at a race that now features the 26.2-mile marathon, a 13.1-mile half marathon, 10K and 5K.

Now set for its 12th annual running, the race takes runners along some of the city’s most notable sights through a combination of downtown areas and residential neighborhoods, and nearly all the way around the waters of Lake Merritt just east of downtown, past the campus of Laney College and through Lake Merritt Channel Park. Those running the half marathon share the same starting line as those running the full marathon, in Snow Park, just a few feet from Lake Merritt.

From there, those running the half follow an out-and-back loop course that follows a roughly clockwise direction around the city, first clockwise around Lake Merritt, then south and west through Chinatown and the old Oakland Historic District. The course then heads west on a loop around West Oakland before heading north up Broadway.

While the rest of the half marathon is relatively flat, the middle section of the course heading north along Broadway features a slow and steady uphill climb of about 100 feet over the course of two miles. Runners will run all the way to Oakland Technical Senior High School north of the city center, where the course makes a loop around the high school.

After that, it’s just a few more turns through the center of Oakland before returning to the finish line at Snow Park. 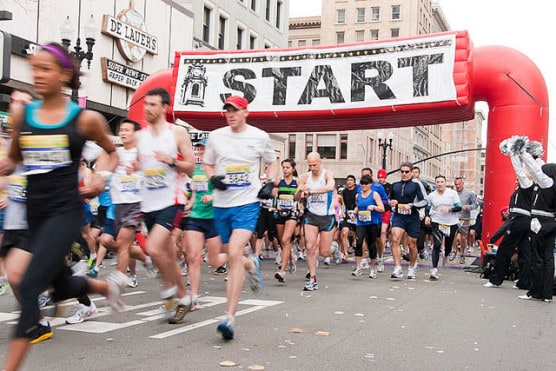 Located just across the Bay Bridge, over the San Francisco Bay a few miles east from downtown San Francisco, Oakland typically experiences mild to moderately cool weather in the early spring, and more wet weather in spring than in the summer, when conditions here are at their driest.

See the race route map for the Oakland Running Festival Half Marathon here.

To reserve your spot in any of the race distances at the 2023 running of the Oakland Running Festival, register online at RunSignUp.com here.

Ever run in the Kaiser Permanente Half Marathon at the Oakland Running Festival? Share your impressions here, or post your review in the Comments below.