Flash back to the 1960s — when Jimi Hendrix, Bob Dylan and the Beatles ruled — for this race’s sixth annual running along the shores of San Diego’s Mission Bay Park in the spring of 2018, when the Peace-Love-Run Half Marathon takes runners on an out-and-back race near the Hilton San Diego Resort and Spa, overlooking the waters of Enchanted Cove.


The race is one of three races run under the “Peace-Love-Run” banner, with the others taking place in March in Ventura and Sacramento. This springtime race unfolds along the meandering beaches of Mission Bay, a more than 4,200-acre man-made water park that lies next to a natural saltwater lagoon near San Diego’s Pacific Beach, and is home to world-famous attractions like Sea World.

Runners start the race just south of the Hilton Resort and Spa along East Mission Bay Drive, and from there head south along the road to Fiesta Island Drive, where they’ll turn right to head across the land bridge and over to the island. This large peninsula is a popular spot for running and biking races, and also just for day recreation with its off-leash dog park.

The course unfolds twice around the northern half of Fiesta Island, and then brings runners south along its opposite end before heading back across the land bridge and over to the paved trail just before Mission Bay Drive. Here, runners turn right to head onto the trail, which will take them south and west all the way to South Shores Park, where they’ll hit the first turnaround point between miles 7 and 8.

After that, most of the second half of the race unfolds along the Mission Bay Park shoreline, taking runners north through Playa Pacifica Park, Leisure Lagoon and De Anza Cove Park, where they’ll turn around again. That’s the final turnaround before runners head back to the finish line near the Hilton San Diego, back where they started.

The course is almost all flat and fast, organizers say, “with panoramic bay views of grassy knolls, palm trees and the blue bay.” The race’s theme is a flashback to the 60s, and the race medals look like the “Mystery Machine” from Scooby-Doo, emblazoned with the flower power celebration of peace and love. 🙂 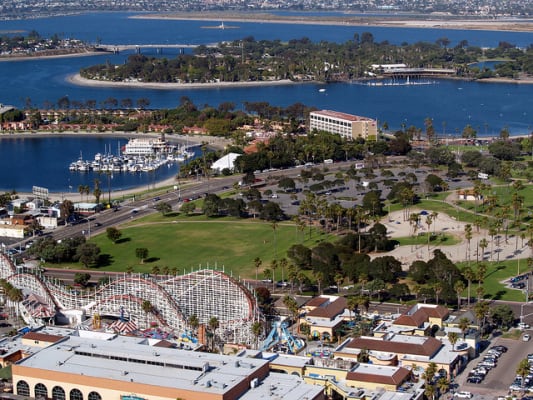 Located near the southernmost corner of California, roughly 120 miles southeast of Los Angeles, San Diego typically sees April temperatures between 56ºF and 69ºF, while record temperatures have fallen as low as 41ºF (in 1945) and risen as high as 98ºF (in 1989) during the month.

On race day (April 1), the average low is 55ºF and the average high is 68ºF, and rainfall is generally scarce, averaging about 3/4 of an inch for April.

See the race route map for the Peace-Love-Run San Diego Half Marathon here.

To reserve your spot in the spring 2018 running of San Diego’s Peace-Love-Run Half Marathon, 10K or 5K race, register online at Active.com here.

Ever run in San Diego’s Peace-Love-Run Half Marathon? Share your impressions here, or post your review in the Comments box below.