An annual early summer running tradition for the past decade and a half here in one of Southern California’s most naturally beautiful and picturesque cities, the storied San Diego Rock ‘n’ Roll Marathon added the 13.1-mile half marathon race distance for the first time at its June 2010 running.

One of the longest-running races in the history of the Rock ‘n’ Roll marathon series, the race takes runners through many of the city’s most beautiful areas.

From the starting line next to Balboa Park — home to several of the city’s best-known attractions, including its natural history museum as well as the world-famous San Diego Zoo — the half marathon follows a winding course both through the neighborhoods north of the park, like University Heights and Normal Heights, some of which look over into Mission Valley.

The race starts at the intersection of 6th Avenue and Quince Street, and follows along the same course as the full marathon for the first 8 miles. Runners will head north towards North Heights  with a long stretches on 30th St. and Mountain View Dr for miles 4 to 6.

Before runners reach the mile 9 marker, the full marathoners split off from those running the half, and continues on a course that will take them along University Ave west towards Mission Bay near SeaWorld.

But for the half marathoners, the race heads south into the beauty of Balboa Park, where the route follows Jacaranda Place and Pershing Drive through the park, passing by the golf course and Bennington Oak Grove along the way. The race finishes close to the water on State St. 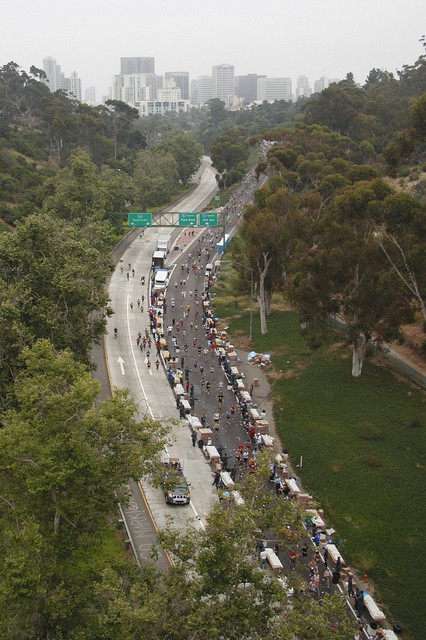 The leaders at the 2010 Rock ‘n’ Roll Marathon. (Photo by irene/flickr)

Nestled in the southeastern corner of the state in Southern California, San Diego is widely known for its virtually year-round sunny and mild weather conditions, which rarely rise higher than the 70s or fall lower than the 60s in the summer. Rainfall is rare this time of year, averaging less than 0.1 inches for the month of June.

To reserve your spot in the 2023 running of the Rock & Roll Marathon or Half Marathon race, register online at Active.com here.