Set for its 8th annual running in 2020 under the Rock ‘n’ Roll Marathon series of races, the Rock ‘n’ Roll San Francisco Half saw more than 8,500 runners cross the finish line last year for this race that takes runners across the Golden Gate Bridge and back, up from just over 5,800 at its inaugural running back in 2013.


The race begins near Fisherman’s Wharf, near the intersection of Stockton Street and the Embarcadero. From there, runners head south along along Powell Street and then west along Bay Street, heading toward the San Francisco Bay waterfront along Marina Boulevard.

That’s followed by a stretch along Marina Boulevard and through Crissy Field, which a long time ago was a salt marsh and estuary that was turned into an airfield for the U.S. Army during World War I. After the airfield closed in the early 1970s, it was later turned into part of what is now Golden Gate National Recreation Area.

After the stretch along the waterfront, runners head next into the Presidio, the onetime military base that’s now known for its wooded hills, tree-lined roads and gorgeous views, and it also home to the corporate offices of Lucasfilm, George Lucas’s film production company.

Once they reach the Presidio Parkway, between miles 4 and 5, the crown jewel of the course is up next.

That’s the stretch over and back across the Golden Gate Bridge, which — if the weather cooperates — offers up some of the most spectacular, breathtaking views you’re likely to ever see.

The sun glinting off the waters of San Francisco Bay, coupled with the dramatic red-orange architecture of the bridge itself, is something to behold and take in as much as you can while you run.

It also includes some of the race’s steepest hills, at least along the access road going onto and coming off the bridge.

After that is a respite from the hills in the stretch along Crissy Field and Marina Boulevard, but the final few miles of the race bring you back along Marina Boulevard and Bay Street, before turning on Polk Street to head into the finish line at Ghirardelli Square and the San Francisco Maritime National Historical Park.

The course time limit is 4 hours, and both runners and walkers are welcome. 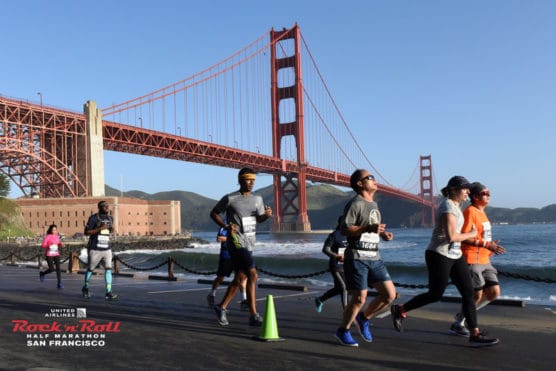 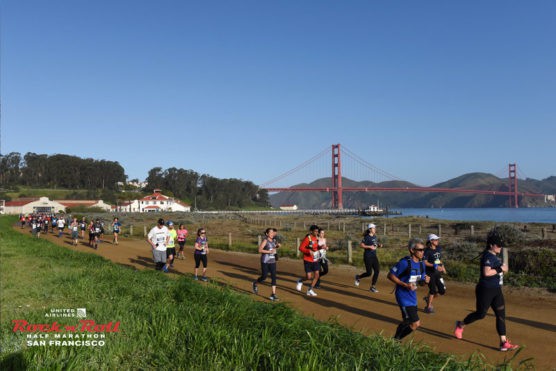 Located in Northern California along the coastline of San Francisco Bay and the Pacific Ocean, San Francisco typically sees an average of 1.25 inches of rainfall in April, while temperatures during the month here have risen as high as a record 94ºF (in 1989) and fallen to as low as 23ºF (in 1996).

To reserve your spot in the spring 2019 running of the United Airlines Rock ‘n’ Roll San Francisco Half Marathon, register online at Active.com here.

Ever run in the Rock ‘n’ Roll San Francisco Half Marathon? Share your impressions here, or post your review in the Comments box below.