Romancing the Island Half Marathon & 10K

Set for its 6th annual running with the half marathon distance, the Romancing the Island race here on Angel Island State Park has seen several distances over the years — a few years ago it was just a 10K, and the years before that it offered a 12K and 25K, all offering up some of the most stunningly scenic views you can find in the Bay Area.

You’ll get to go back in time. The race is run on the largest natural island in San Francisco Bay, where the Coast Miwok tribes hunted and fished many hundreds of years ago, and was a stop for Spanish explorers like Juan Manuel de Ayala, who drew the first map of the San Francisco Bay in the 1700s.

From the starting line at the Ayala Cove picnic area, runners will head southeast along the road to the main road that circles the island. Once they meet up with the road, shortly after they’ll head onto the Sunset Trail, one of the many miles of trails that wind through the heart of the island and make their way up to Mount Livermore, the island’s summit.

You’re going to go up. Expect some challenging hills on this run, which starts at just above sea level and climbs to nearly 630 feet by the time you reach the 3rd mile marker. The up-and-down will continue throughout the race as you wind along the Sunset Trail, some fire roads that connect to the trail, and the Northridge Trail later in the race. 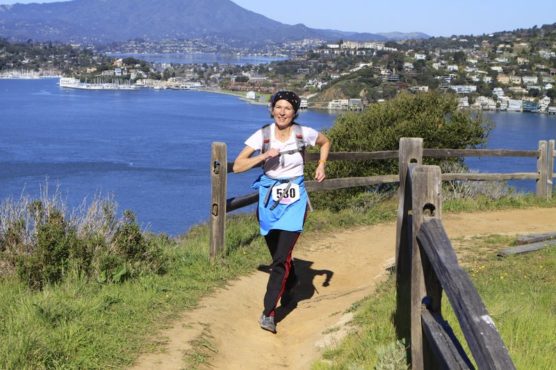 A runner on the trail at the Romancing the Island Half Marathon. (Courtesy Enviro Sports)

The race will bring you all the way back to the aid station at Ayala Cove at the half-way point of the half marathon; after that, you’ll head back onto the Sunset Trail and run the route you’ve just completed a second time to get your 13.1 miles in.

You’ll get there by ferry. Because it takes place on an island to which there is no bridge, you’ll need to drive to Tiburon and park at the Angel Island Ferry Dock, where you’ll take the ferry across the bay. Parking lots cost between $4 and $10, organizers say, with the lots closer to the ferry dock more expensive than those further away.

Be sure to check the official race website for complete details on getting to and off the island. 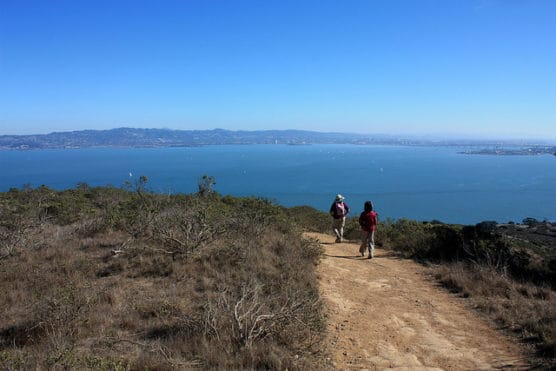 One of the many miles of trails that wind through Angel Island State Park, Calif. (Photo by Ray Bouknight/flickr)

Located out in the middle of San Francisco Bay, Angel Island State Park’s weather is much like that of Belvedere Tiburon just across the water. There, April brings mild temperatures (between the 40s and the 70s) and much drier weather than the preceding few months, averaging just over 2.5 inches of rainfall for the month.

See the race route map for the Romancing the Island Half Marathon here.

To reserve your spot in the spring 2023 running of the Romancing the Island Half Marathon or 10K race, register online at RaceRoster.com here.

Ever run in the Romancing the Island Half Marathon? Share your impressions here, as well as anything you learned about the race that you think other runners/walkers should know.