One of two local half marathon events that features Pasadena’s famed Rose Bowl Stadium along its course, the Rose Bowl Half Marathon typically sees more than 1,000 runners and walkers cross the finish line in both distances at its annual late winter running, with more than 400 runners finishing the half-marathon alone.

Run on a scenic course that unfolds along a combination of paved roads and natural trail surfaces, the race takes runners past many of the city’s most famous landmarks, including the stadium itself as well as the Devils Gate Dam & Reservoir, the NASA Jet Propulsion Laboratory and the Arroyo Seco.

The out-and-back loop course for the race starts and finishes next to Rose Bowl Stadium, and takes runners first on a route southward alongside Brookside Park and Lower Arroyo Seco Nature Park, along the concrete Arroyo Seco Channel waterway.

Runners head all the way south to Madeline Drive and then turn onto Grand Avenue, where they begin a long straightaway that takes them up to the Brookside Golf Course and into Upper Arroyo Park, where they cross under the highway and into Oak Grove Park.

The course then takes a full loop around Oak Grove Park and the Devils Gate Reservoir, crossing over the Devils Gate Dam at Explorer Road. From there, runners head past the Jet Propulsion Laboratory and begin the last few miles of the race that take them south through the park and back toward the finish line at the Rose Bowl.

The last few miles include some of the race’s hilliest terrain, as well as ample views of the San Rafael Hills and the San Gabriel Mountains in the distance.

While the 5K is open to both runners and walkers, the half marathon is open to runners only. The race course for the half-marathon will also include eight fluid stations for runners. 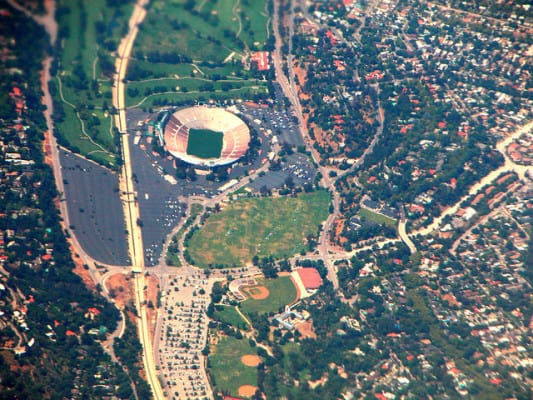 Aerial view of the Rose Bowl and surrounding areas in Pasadena, California. (Photo by Doc Searls/flickr)

See the race route map for the Rose Bowl Half Marathon here.

To reserve your spot in the late winter 2024 running of Pasadena’s Rose Bowl Half Marathon, 10K or 5K race, register online at Active.com here.

Ever run in the Rose Bowl Half Marathon? Share your impressions here, or post your review in the Comments below.